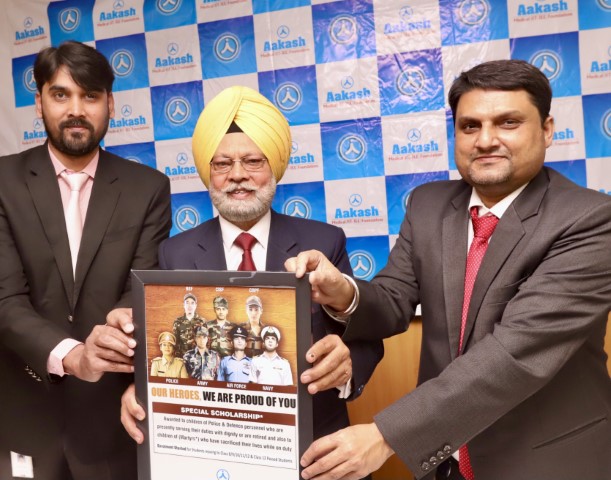 Taking the 8-year-old tradition ahead, Aakash+BYJU’S announced the continuation of the 100% tuition fee waiver for children of Martyr’s for the next academic calendar starting March 2022. Apart from this, the 10% scholarships for wards of Defence Personnel and those affected by terrorism will also continue for the upcoming year.

On the occasion, Major General IP Singh said “The brave men and women of the Armed forces should always be honored for their sacrifice. They risk their lives to protect the citizens’ freedom, it is a selfless act of valor that is done without asking for anything in return. Many of them have had to sacrifice their lives  so the rest of the people can live in a free and prosperous society. I feel honored to be a part of this thoughtful initiative by Aakash+BYJU’S and give my best wishes! We are grateful for the financial support that Aakash+BYJU’S has been providing to wards of defence personnel.”

Commenting on the scholarship for Martyr’s wards, Mr. Parmeshwar Jha, Regional Director, Aakash+BYJU’S said, “It is our humble endeavour at Aakash+BYJU’S to thank the selfless service our armed forces provide to our nation. We are proud to have contributed in making a difference to the lives of around 70,000 children of Armed Forces heroes and are excited to extend the full scholarship for Martyr’s children and scholarships for Defence Personnel’s wards, this year as well. We have been taking this initiative since 2014 and every year it’s an overwhelming experience that in some way touches an emotional chord in our hearts.”

Students are chosen on the basis of certificates of their personal and educational background. They do not have to appear for any aptitude test for admission as is the case with the rest of the students. Many such students have gone on to obtain admission in prestigious medical and engineering colleges across the country like AIIMS, JIPMER, IIT etc