newznew (Chandigarh) : A delegation of Aam Aadmi Party MLAs under the leadership of the leader of opposition in Punjab Vidhan Sabha, Adv. H.S. Phoolka on Thursday met Hon’ble Governor of Punjab, Sh. VP Singh Badnore at Punjab Raj Bhawan to raise the important issues related to the common people of Punjab.

The delegation raised the issues of private schools charging heavy fees from students in contradiction to the Hon’ble court and government directions, to provide relief to farmers by waiving off the farmers loan, scams by the chit fund companies like pearl, crown etc and deteriorated law and order situation in Punjab. 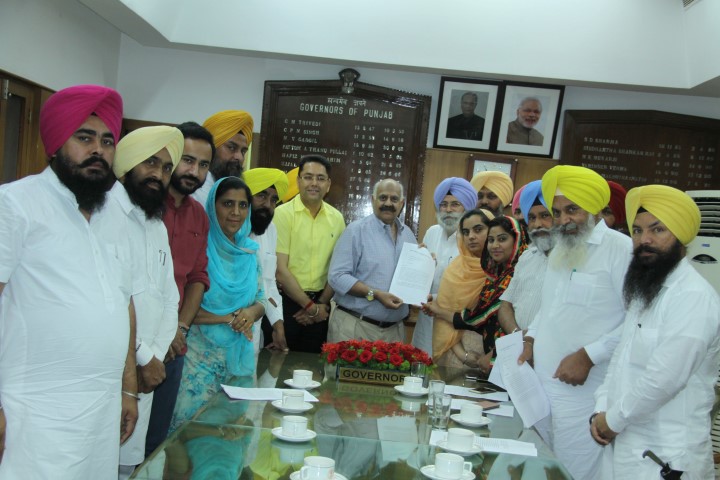 Addressing the media, Phoolka said that the private schools in the state are charging heavy amount of fees from students not only on the name of annual admission fee but also re-admission fees, books and school uniforms. The schools are flaying the guidelines of government and Hon’ble court.  He said that in Government schools, books and uniforms have not been provided to students especially belonging to economically weaker sections (EWS) and the action of private schools is clear violation of Right to Education (RTE) act which has not being implemented by a State Government.

Raising the issue of agrarian crisis in Punjab, Phoolka said that the economic condition of farmers across state is in poor health and every day suicides are being committed by them. He said that the Congress party in its election manifesto promised to provide relief to farmers by waiving off the farmers loan but no relief in any form has been provided to farmers till date. He said that it is the need of the hour is to provide immediate relief to farmers by waiving off loans.

Speaking about the financial scams by chit fund companies like Pearl, Crown etc, Phoolka said that these companies and their Directors had purchased substantiate properties under the shell companies and relatives of the Directors.  It is the duty of the police to investigate and find such properties. These properties should also be attached and auctioned to refund the money to investors. He said that the Govt must ensure that such scams do not take place in future and hard earned savings of innocent citizens are protected. The management of Gian Sagar institute of Medical Sciences, owners of Pearl Company, should be held responsible for the mess created and trustees should be held responsible for it. The Government should immediately take over the institute to secure the future of students and properties of trustees should be confiscated.