NewZNew (Pangkalan Bun) :  After nearly a week of searching for the victims of AirAsia Flight 8501, rescue teams battling monsoon rains had their most successful day today, more than tripling the number of bodies pulled from the Java Sea, some still strapped to their seats. 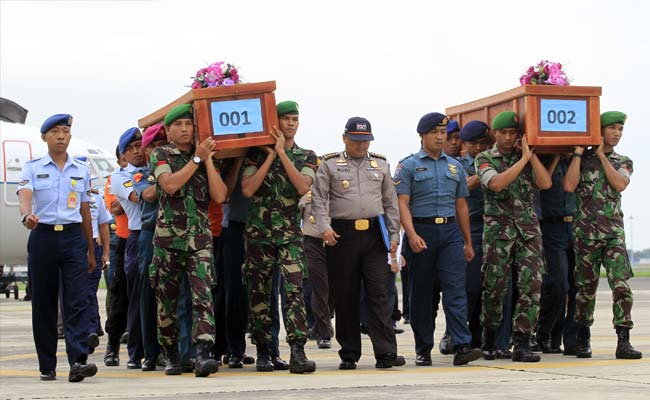 Of the 30 corpses recovered so far, 21 were found today, many of them by a US Navy ship, according to officials.

The Airbus A320 carrying 162 passengers and crew went down on Sunday, halfway into a flight from Surabaya, Indonesia’s second-largest city, to Singapore. Minutes before losing contact, the pilot told air-traffic control he was approaching threatening clouds, but was denied permission to climb to a higher altitude because of heavy air traffic.

It remains unclear what caused the plane to plunge into the sea. The accident was AirAsia’s first since it began operations in 2001, quickly becoming one of the region’s most popular low-cost carriers.

In addition to looking for victims, Search and Rescue Agency chief Henry Bambang Soelistyo said ships from Indonesia, Malaysia, Singapore and the US are scouring the ocean floor as they try to pinpoint wreckage and the all-important black boxes.

The data recorder contains crucial information like engine temperature and vertical and horizontal speed; the voice recorder saves conversations between pilots and other sounds coming from inside the cockpit.

Toos Saniotoso, an Indonesian air safety investigator, said investigators “are looking at every aspect” as they try to determine why the plane crashed. “From the operational side, the human factor, the technical side, the ATC (air-traffic control) – everything is valuable to us.”

Bad weather, which has hindered the search for the past several days, remained a worry. A drizzle and light clouds covered the area this morning, but rain, strong winds and high waves up to 4 meters (13 feet) were forecast until Sunday. Strong sea currents have also kept debris moving.

That has severely slowed recovery efforts, as well, as bodies drift farther and farther away.

Soelistyo, who was only able to confirm two victims in their seats, said a total of 30 bodies have been recovered.

More than a third have been pulled out by a US Navy ship, the USS Sampson.

Soelistyo pledged to recover the bodies of “our brothers and sisters … whatever conditions we face.”

Four crash victims have been identified and returned to their families, including a flight attendant and a 12-year-old boy.

After today’s prayers (Friday), the holiest day of the week for Muslims, more than 200 people gathered at a mosque in Surabaya to remember the victims.

“We pray that the passengers in this AirAsia tragedy will be received by Allah,” the imam said, “and that all their sins will be forgiven by Allah.”