NewZNew (Chandigarh) : ALLEN Career Institute, Chandigarh Center conducted a7 days HI- PACE workshop for students of class 9th & 10th aiming towards NTSE, IJSO & RMO at its Sector 34 A Campus from 6th June’16 to 12th June’16. The workshop was attended by more than 170 students all across from Chandigarh, Punjab, Haryana & Himachal.

Allen is a renowned name when it comes to prestigious exams like NTSE, JSO & RMO. Last year ALLEN produced 123 NTSE Scholars, while this year more than 235 students were selected for NTSE Stage 2 Exam which was held in May’16. Top positions from all across Tricity, Punjab & Haryana for NTSE Stage – 1 were captured by Allen Chandigarh Center. For a coveted exam like IJSO, 4 students out of Total 6 were selected from Allen for representing India at an international Level.

The Workshop was held in three parts, viz Class 9th students attended IJSO Classes, while Class 10th students were trained for NTSE, while 50 odd students, both from Class 9th & 10th were guided for RMO. 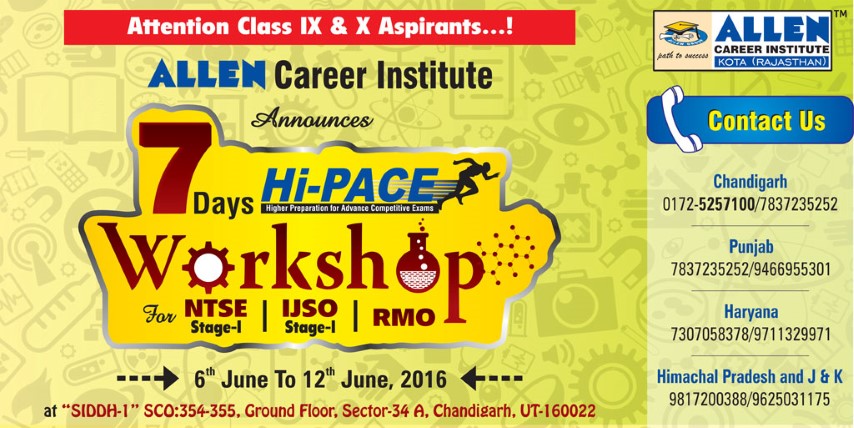 Pushkar Rai, Center head, Allen Career Institute, Chandigarh Center informed that students from all across tricity & three neighboring states were highly motivated and came to know a new dimension of competition. They were taught using Multimedia in classrooms and many students found it very helpful. He also, told that a Mock NTSE test was also conducted for these students and Test Discussion was also done and when the result for the same was declared it gave them a glimpse of a national level competition.

A second phase of this successful workshop will be conducted in October month of 2016 and it will take student’s NTSE/JSO/RMO Practice to an altogether new level.

Stalin to be sworn in as CM along with 33 ministers...

Dubai’s Emperor Sheikh Rashid Son Dies At Age Of 33 Due...