[dropcap]A[/dropcap]ctor Allu Arjun’s latest Telugu action-drama “Duvvada Jagannadham” aka “DJ” not only shocked the audience but also shocked the trade analysts with its extraordinary figures. It has joined the Rs 100-crore club in just a week since its release. In an official poster on Friday, the makers announced the film has grossed over Rs 100 crore in just a week. 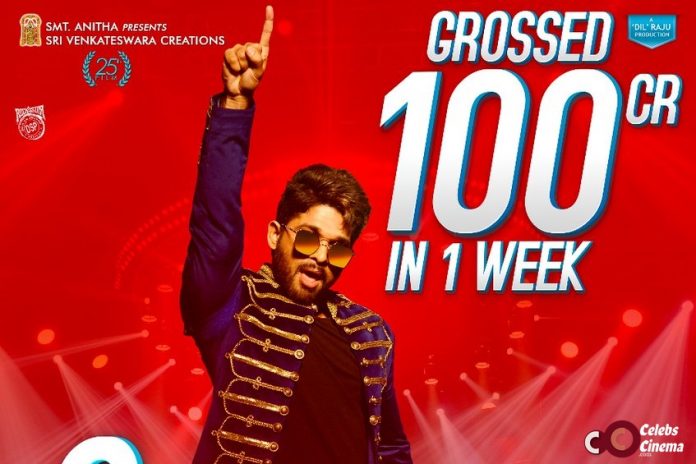 This is the third film for Arjun, post “Race Gurram” and “Sarrainodu”, to have joined the Rs 100-crore club. The film is also the third hit in a row for producer Dil Raju and Arjun, who had previously worked in films such as “Arya” and “Parugu”.

Crossing all the expectations, Duvvada Jagannadham has opened a fantastic response from the day one and collected Rs 33 crore on its first day. Despite opening to mixed reviews, DJ is running to packed houses in Andhra Pradesh and Telangana. The film has reportedly earned more than Rs 50 crore from its ticket sales in the Telugu states alone.

Directed by Harish Shankar, the film features Arjun in the role of a Brahmin cook-turned-vigilante. Also starring Pooja Hegde, Rao Ramesh, Subbaraj and Murali Sharma, the film has music by Devi Sri Prasad.

Meanwhile, Allu Arjun is teaming up with Vakkantham Vamsi for Naa Peru Surya Naa Illu India, where he is said to play a soldier.

Build your dream home in the Silicon Valley of India