Directed by Sekhar Kammula, Upcoming Telugu film Fidaa will further explore the idea loved by our cinema – ‘opposites attract’. The film stars Varun Tej and Sai Pallavi, who are looking too good in the first trailer. The entire shoot of the film has been wrapped up and the promotional activities have been already started. The makers are leaving no stone unturned in promoting the film. 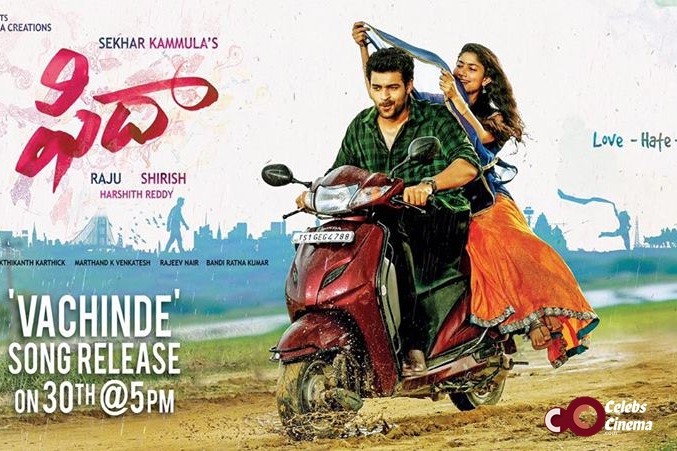 According to the latest update, ‘Vachinde’ song from Fidaa will be released today at 5 pm. Varun confirmed the news via his official social media accounts. He released and posted and wrote, “First single “Vachinde” from #Fidaa will be out tomorrow at 5PM. Stay tuned ❤️ #Fidaa “

Fidaa which has the tagline ‘Love-Hate-Love’, is the story of an NRI who falls in love with a girl from Telangana. Sai Pallavi is playing the female lead in the film, which also features Harshvardhan Rane in a key role. Music for the film is scored by Shakthi Kanth. This song was sung by Madhu Priya and Ramky

Produced by Dil Raju under the banner of Sri Venkateswara Creations, this film is looking like the perfect project that could give break to Varun Tej. Though he’s praised for looks and acting already, there is no single hit to sweeten and strengthen his career and market.

Sai Pallavi has a huge fan base for portraying the role of Malar in Premam, is making her Telugu debut with this romantic entertainer. Followed by her role in Kali, this film will decide her image as an actor in Telugu film industry. Hope Fidaa will do the needful for both the lead actors.