NewZNew (Chandigarh) : “Nothing is as important as passion. No matter what you want to do with your life, be passionate”, said His Excellency Prof. Kaptan Singh Solanki, Governor of  Punjab and Haryana, Administrator, Union Territory, Chandigarh, the Chief Guest on the occasion of  Annual Day at Dr. Ambedkar Institute of Hotel Management, Chandigarh under Ministry of Tourism, Government of India. Shri. Parimal Rai, IAS, Adviser to Administrator, Chandigarh Administration, was the Guest of Honour. It was doubtlessly a remarkable event led by passionate Principal, faculty and staff. The students portrayed their dexterity on this occasion to display the creative talents hidden in them.

Shri. Anurag Aggarwal, Home Secretary Chandigarh along with prominent dignitaries of the Chandigarh Administration, Hospitality Industry and Academia graced the occasion with their benign presence.

The Principal, Mrs. Bharti Tyagi presented the Institute’s Annual Report emphasizing on the pride achievements, excellence in academics as well as co-curricular activities in the year 2015 – 16. She also applauded the faculty and students for taking initiatives in various areas and bringing laurel to the institute.

Following the presentation was an attractive and awe-inspiring display of Bharat Natyam, Bengali Folk Dance and Western Dance where the performers showcased their versatility in field of dancing.

The evening was made further extravagant and flamboyant by the release of the 18th issue of “Gourmet’s Affair”, the Annual College Magazine of the Institute by the Chief Guest, distinguished guests along with the Principal and the Editorial board. The magazine contains the anecdotes of various activities organized by the Institute along with captivating articles and research papers submitted by the students and the faculty of the Institute.

Hon’ble Prof. Kaptan Singh Solanki, addressed the students with his thought provoking speech saying words of wisdom that one could incorporate in his life. He further spoke of the importance of hospitality and its allied sectors in today’s world, its economic help for the development of the nation as well as the opportunities they offer to young hospitality minds. He applauded Principal and her entire team for providing value based education and receiving innumerable awards, laurels and accolades from distinguished entities of Academia and Industry. 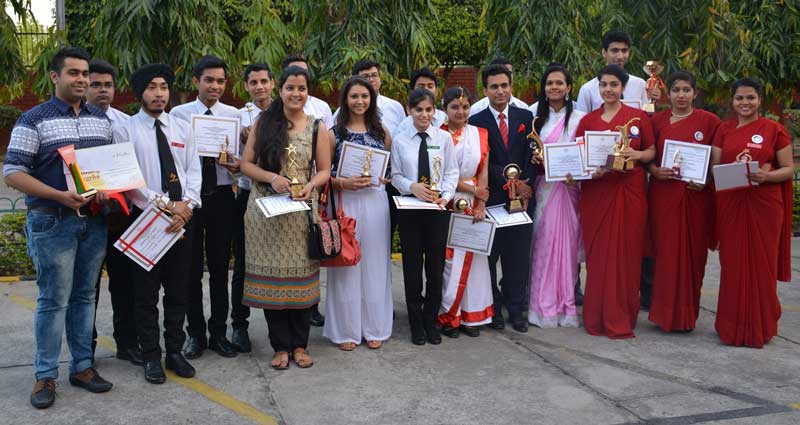 DETAILS OF THE AWARDS

The cultural event was concluded by the energetic dance performance of Bhangra that cheered and energised the audience. Thereafter, a sense of patriotism was exhibited by unanimous singing of the National Anthem.

After the function, a Hi-Tea was organized in the Institute’s restaurant, “Atithi” which was decorated on the theme of Cultures of India, where various assortments, delicacies and innovative mocktails like “The Flamingo” and “Purple Rain” were a delight to the guests.

The event ended with every shining star carrying a feeling of happiness and achievement within itself. The amazing and colourful items of the show revealed as to how much the entire AIHM team under leadership and guidance of Principal have put in their tireless efforts in exhibiting this program.

A promising Chitkarian emerges as an Aspiring Artist in the upcoming...