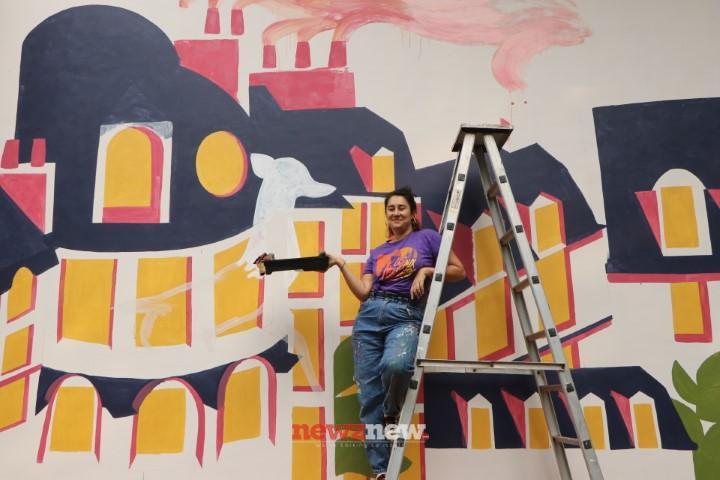 Born in 1985, Olivia after obtaining a diploma in Applied Arts and Animated Cinema, met the 9e Concept collective with Romain Froquet and Lapinthur.

Olivia de Bona is distinguished by her rich and colourful universe, close to illustration. All her work echoes our childhood’s imagination: her strange and elegant characters, sort of fantastic battalions, intersect, mingle and will blend as in a dream.

Halfway between the cartoons of our childhood and popular tales, Olivia keeps us between two worlds, between the sweetness of our memories and their darkest recesses.

“For this mural art, I want to find a few emblematic motifs to represent the “French-style” architecture in a city marked by Le Corbusier. I am going to reclaim a certain idea of France and let it be invaded by lush vegetation by inhabiting it with animals typical of this corner of India!”, she said.

Olivia while explaining about her art work titled, ‘Let India put colors in my life’ added, “The idea showcases France meeting India. It’s kind of funny that the sad and grey rooftops of Paris, on a rainy day, are given the effect of India, which on the contrary, has a lot of colours, vegetation and animals. It’s like France transforming into India, when you’re crossing through their border.

I’ve created this piece of art with a little bit of both France and India as a gift to the French learners so that whenever they come across this wall art they can connect with the Parisian architecture with Indian diversity.”

Olivia de Bona has participated in many street art events such as L’Art à l’Ourcq in 2014. In the The Aucwin route, the street art route in Saint-Denis, organized by 6B in 2015. She participated, in 2021, at the Fenêtre sur rue street art project in Aubervilliers.

In addition to her participation in many street art events during which she creates murals, she illustrates children’s books like Go! Kiki Go !.

The French Institute in India, the network of Alliances Francaises in India, JSW Paints and their partners will pursue the development of a second edition of the Wall Art Festival. From the 7th of November until the 2nd of December 2022, all the invited artists will aim to make our cities and public space always more colourful and beautiful, through the vision of visual artists.

Besides Chandigarh, the artists would be travelling to 13 cities, including, Delhi, Jaipur, Mumbai, Kolkota, Ahmedabad, Bhopal, Chennai, Trivandrum, Hyderabad, and Pune.