MOVE AIMED AT FACILITATING SONS OF THE SOIL

DESCRIBES NRIs AS AMBASSADORS OF PUNJAB, PUNJABI AND PUNJABIAT IN FOREIGN COUNTRIES 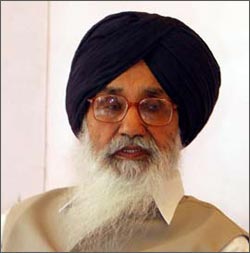 NewZNew (Ludhiana) : Acting on the suggestions received from NRIs during three Sangat Darshans across the state, the Punjab Chief Minister Mr. Parkash Singh Badal today announced review of the state government’s major policies concerning the well being of NRIs.

Addressing the gathering during third and concluding Sangat Darshan exclusively for NRIs here today, the Chief Minister said that these Sangat Darshans have proved to be a boon both for the state government and NRIs as they have enabled the former to have an in-depth understanding of the policies related to the latter. Describing the NRIs as ambassadors of Punjab, Punjabi and Punjabiat in foreign countries, he said that they were both an asset as well as pride of the entire Punjabi community so it was the bounden duty of the state government to ensure their welfare. “The interactions with NRIs during these three days have enabled me to completely understand the problems faced by them and we will make all out efforts for rectifying the mechanism, wherever needed, to address their grievances”, added Mr. Badal.

Announcing the review of major policies concerning the NRI brethren, the Chief Minister said that in order to facilitate the NRIs in early resolution of the problems related to Police department, the state government was contemplating to give the powers regarding enquiry of cases against them to the local Senior Superintendent of Police (SSPs). He said that in order to prevent any undue harassment of NRIs by fake Police complaints at present any complaint against them was investigated at the level of the Inspector General (IG) of NRI cell. However, Mr. Badal during these Sangat Darshans many NRIs have advocated that this investigation must be conducted at level of SSP of the concerned district, for saving time and energy of NRIs, so the state government would explore the feasibility of this matter.

Likewise, the Chief Minister said that going by the pendency of the Revenue Courts, the work of these also needs to be streamlined for which the state government would take the necessary steps. He said that NRI brethren have to wait for long to get their cases resolved in these courts so the state government would take adequate steps to expedite the process of clearing these cases.

Dwelling on another issue, the Chief Minister also announced that in order to ensure better participation of the NRI brethren to develop the state, the Punjab government would remove the shortcomings in the matching grant scheme so that the Punjabi Diaspora settled abroad could be more actively involved in the development of their native village/ town. He said that NRIs were keen to be a partner for the development of their villages so the state government would take every step to facilitate them. Mr. Badal said that soon a mechanism would be evolved for making this scheme more practical to suit the NRIs.

The Chief Minister also announced that the process for evacuation of the properties of NRIs in the state would also be made hassle free so that they do not face any sort of problem. He reiterated the commitment of the state government to ensure the welfare of the Punjabi Diaspora adding that every step would be taken to ensure their well being.

Expressing concern over the pendency of cases in dedicated Civil court for NRIs in Jalandhar, the Chief Minister said that he would flag up this issue before the Chief Justice of Punjab and Haryana High Court. He said that a large number of NRIs have raised this issue during the Sangat Darshans as they have to face a lot of problem due to the pending cases in this court. Mr. Badal said that he would urge the Chief Justice for finding some viable solution for this problem faced by the NRIs.

The Chief Minister further said that these Sangat Darshans have helped in having a deeper understanding of the problems faced by the NRIs through mutual discussion. He said that more such efforts would be made to have a closer view of matters related to NRIs for their early resolution. Mr. Badal also called upon the NRIs to give their suggestions for improving the functioning of the government to the NRI Affairs department for better functioning of the state government towards their welfare.

The Chief Minister also listed the path breaking initiatives taken by the state government for ensuring the welfare of NRI brethren.

Earlier Minister for NRI affairs Jathedar Tota Singh, while welcoming the Chief Minister, hailed his vision for holding these Sangat Darshans for ensuring the well being of NRI brethren.