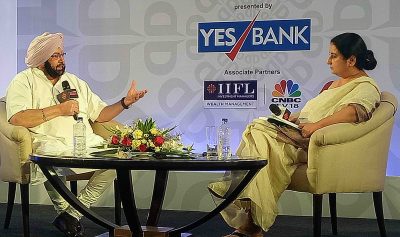 Trudeau is welcome to come but we will not be cowed down by the threats of forces such as the Sikhs for Justice (SFJ), said the Chief Minister, dismissing as irrelevant the outfit’s warning that it deal with anyone trying to remove the provocative referendum posters it had put up across Punjab.

Captain Amarinder was responding to questions at the Indian Express Adda programme, where he spoke candidly and at length on a wide range of issues of national and state interest, including Indo-Pak relations, GST, SYL, farm debt waiver, drugs, unemployment, presidential elections, Congress fortunes and more.

Stressing that opening of the Indo-Pak border would be of immense benefit to Punjab, the Chief Minister, in response to a question, expressed the hope that someday the dream of having dinner in Lahore (Pakistan) and lunch in Amritsar (India) would become a reality. While the people of both countries welcome one another with open arms, the problem lies at government to government level, he said. The Chief Minister informed the audience that his government would dedicate the 1947 partition museum to the nation in August this year.

Repeating his stand on GST, Captain Amarinder said it would bring Rs. 5000-6000 crore or so into Punjab’s exchequer. To a question on the Congress opposition to the new tax structure, he said the party was not in favour of multiple slabs and had wanted to cap it at 18%, with a maximum of two slabs. However, the central government had gone in for multiple slaps with a cap of 48%.

On the issue of farm debt waiver, the Chief Minister, in conversation with Indian Express National Opinion Editor Vandita Mishra, said lack of support from the Centre prevented his cash-strapped government from waiving off the entire debt of Rs. 69000 crores of the farmers. The state was in a financial mess, said the Chief Minister, asserting that said his government was committed to bringing the state back on rails and had succeeded, in the first 100 days itself, in increasing revenue by 33%.

The Rs. 1500 crore allocated in the budget for waiver of loans of small and marginal farmers would be used by the state government to leverage and settle their loans. As far as the loans taken from arthiyas were concerned, it was difficult to assess the quantum as those were usually off the books, he said, adding that effort were being made to ascertain the same.

Stressing the need for a permanent solution to the farmers’ problems, he pitched for GM crops to increase production, thereby boosting agricultural incomes.

Referring to the SYL controversy, the Chief Minister reiterated that any move to deprive the people of Punjab of the much-needed water would lead to revival of terrorism. He once again underlined the need to check the availability of water in Punjab before taking any decision in the matter and called for dialogue to resolve the critical issue of national interest.

On the Congress performance in recent years, Captain Amarinder said ups and downs were a part of a vibrant democracy, which helps keep political parties in check. He expressed the confidence that the Congress would bounce back under the leadership of Rahul Gandhi, who he said has a strong future. The Chief Minister reiterated his suggestion for promotion of regional leaders to counter the regional parties that have a strong presence in various states.

Captain Amarinder agreed that there had been delay in the announcement of the candidature of Meira Kumar for the presidential election, saying it would have been better if she had been named earlier.

To a question whether mutual respect between the Congress and AAP was missing in the Assembly, the Chief Minister said the AAP legislators were novices who needed to learn parliamentary procedures. It will take them time to learn the ropes, he said, adding that he had requested the Speaker to conduct classes from them.

The Chief Minister said the Speaker had showed a lot of restraint in the face of the unruly AAP ruckus in the House, which no longer sees meaningful debates. There was a time when all Congress and other party members would come to hear Atal Behari Vajpayee speak in Parliament but now those who have the numbers shout down the others, he said, lamenting the decline in standards in such institutions.

The Chief Minister said after Delhi, it was widely believed that AAP would be a challenge in Punjab, but the fact was that with their perceptive nature, the Punjabis saw the mess made by the party in Delhi and did not want a repeat of the same in their state. They (AAP) only managed to win seats in southern Punjab, which has a history of Naxalism, he added.

On the Rana Gurjit controversy, the Chief Minister reiterated that his government would not succumb to media trial and opposition pressure but would wait for three committees set up to probe the matter to submit their reports. If he is found guilty, he will not remain a minister, but it would not be justified to sack him without fair trial, said Captain Amarinder, underlining the need to have faith in the judiciary.

Asked for his reaction on Omar Abdullah’s tweet on the use of a stone pelter as a human shield in Jammu and Kashmir, the Chief Minister challenged him to come and face such a situation. The young officer, who showed remarkable initiative, had no other option, as shooting his way in and out would have resulted in the killing of many people, Captain Amarinder observed. The officer’s initiative, said Captain Amarinder, was particularly noteworthy since he did not pass out of NDA but had risen from the ranks.

To a question on the use of army personnel in advertisements and other publicity material, the Chief Minister said it was essential to keep the morale of the soldiers high, especially in view of the bad situations prevailing on the northern, eastern and western borders of the country.

Reiterating the success of the STF and other agencies in breaking the back of the drugs network, the Chief Minister said their eyes were now on the big fish. He regretted the lack of a national drugs policy, which had caused the state to suffer, making it difficult to tackle the cross-border drugs smuggling which had become a major problem as a result of the collusion between the BSF and Pakistani rangers. The then Home Minister LK Advani had rejected his suggestion for frequent change of BSF battalions to tackle the problem, on account of the expenses involved, he added.

Underlining his government’s commitment to women empowerment, he said they had been receiving demands for gyms from girls in villages and would try to address the same soon. He also cited scrapping of the halqa system as necessary to restore the confidence of the people of Punjab in the police. On the restoration of the old system, he said the SSPs had become redundant, which was why his government had decided to restructure the police force.

Responding to a question on the steps being taken to transform Punjab’s urban areas, the Chief Minister said the biggest problem was solid waste management – a sector in which Japanese major Mitsubishi had shown interest. His government was also finding resources for the development of Amritsar and Ludhiana as smart cities.

Captain Amarinder shared that he had always wanted to work for the welfare of Punjab and had told the Congress president the same ahead of the assembly elections in the state.

5 Ways to Increase the Value of Your Car

History will come alive on screens with much anticipated war film...