NDA 1 2017 result is expected to be declared in the first week of July, going by the previous trends. The results of National Defence Academy test (NDA) will be declared in the form of list containing the roll numbers of qualified candidates. Union Public Service Commission (UPSC) had conducted NDA 1 2017 exam on 23rd April for filling 390 vacancies in National Defence Academy and Naval Academy (NA). UPSC NDA result 2017 will be declared online at the Commission’s website www.upsc.gov.in. 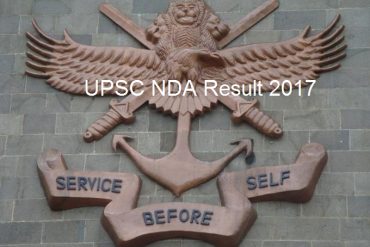 Leading portal Aglasem had cited a telephonic conversation with UPSC Officials (on 5th July) in which it was reported that NDA result 2017 will be announced by 7th July.

UPSC holds the National Defence Academy & Naval Academy Examination twice a year. For admissions to 139th course in NDA and 101st course in Indian Naval Academy, UPSC had conducted the written test in April. The courses will be commencing on 2nd January 2018 and the vacancies are classified as 55 seats in Naval Academy under 10+2 cadet entry scheme, while 335 vacancies in NDA are distributed as 208 seats for Army, 55 for Navy and remaining 72 for Air Force. Based on the written exam, UPSC will hand over the merit list to Service Selection Boards (SSBs) which will further complete the selection process.

Also Read :   Wo Lahore to take a Punjab tour from 11th March to 13th March

NDA 2017 written exam comprised of two papers; wherein Paper 1 (Mathematics) carried 300 marks and Paper 2 (General Ability Test) carried 600 marks. The question papers of 23rd April exam have already been uploaded by UPSC at its official website, while the answer keys (unofficial) were released by coaching institutes after the exam. Till UPSC announces NDA result 2017, the candidates can use the answer key to get an idea about their marks.

UPSC will prepare a merit list based on the minimum qualifying marks in the written exam. The result file containing the roll numbers of qualified candidates will be made public by the Commission. The results of NDA 1 exam held in 2016 were announced in 73 days, considering this we can expect that NDA 1 2017 result will be declared in the first week of July. The exact UPSC NDA result date is expected to be announced by the Commission shortly. The mark sheets of all the candidates will be made available within 15 days from the date of publication of final result.

After the announcement of NDA 1 result, the qualified candidates will have to register themselves online on the Indian Army Recruiting website joinindianarmy.nic.in. The registrations will remain open for two weeks after announcement of written test result. The candidates will be then allotted Selection Centers and dates of SSB Interview. The information will also be sent on the registered email IDs of the candidates.

The written exam qualified candidates will have to undergo a two-stage selection procedure comprising of Psychological Aptitude test and Intelligence Test at Selection Centers/ Air Force Selection Boards/ Naval Selection Boards. The candidates will have to submit original certificates of Age and Educational Qualification to respective SSBs during the SSB interview. The interview will be conducted in the month of September/ October.