Launches Castrol Activ ‘Cling on to the Cup’ Campaign

NewZNew (Chandigarh) : With the ICC Cricket World Cup 2015 round the corner and millions of cricket fans gearing up to support their favorite team, Castrol, Performance Partner of the ICC, has launched Castrol Activ ‘Cling on to the Cup’ campaign that will provide fans an opportunity to be right in the heart of the action through state of the art digital technology. 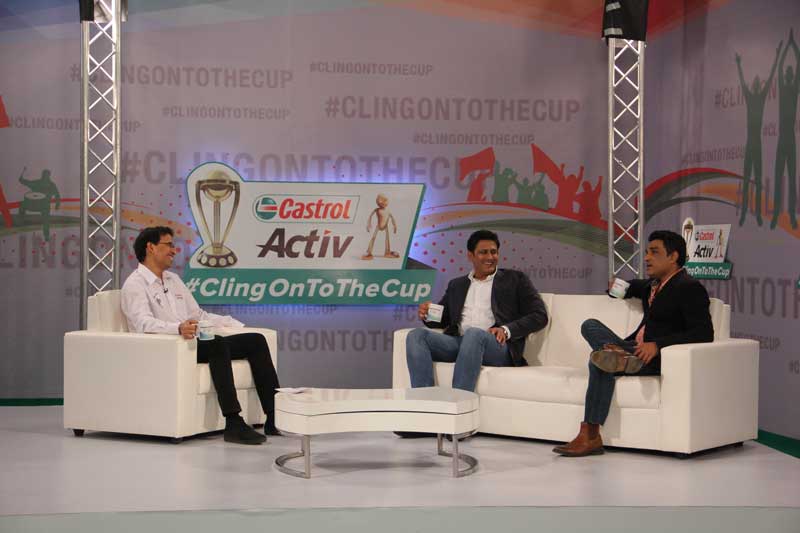 The Castrol Activ ‘Cling on to the Cup’ campaign was kick-started with a live Google hangout where fans discussed the Indian team’s prospects and challenges with Castrol Activ panelists and cricketing stalwarts, Anil Kumble and Sanjay Manjrekar along with well-known cricket commentator and Castrol Brand Ambassador, Harsha Bhogle. The hangout was a lively affair filled with some serious conversations as well as funny quips and comments from fans and panelists alike.

Speaking on the occasion, cricketing legend and Castrol Activ panelist Anil Kumble commented, “Technology has become an integral part of our lives and Castrol with its reputation for pioneering product technology, has successfully harnessed digital technology and created a unique experience for all cricket fans. For the first time ever, cricket fans will be able to be present virtually in the stadium, in support of their favorite team.”

Over the last five years, Castrol India has endeavored to bring fans closer to the action and provide a more immersive and interactive experience. Castrol Activ ‘Cling on to the Cup’ campaign is a continuation of these efforts. Apart from the Castrol Activ Hangout, the campaign will include other initiatives that are interactive and engaging for the fans, bringing them closer to the action during the ICC Cricket World Cup in Australia & New Zealand.

Commenting on the campaign, Ms. Soma Ghosh, Vice President, Marketing-India & South Asia, Castrol, said: “Castrol is excited at the prospect of giving Indian fans the opportunity to cheer on their heroes at the ICC World Cup 2015. Over the last five years of Castrol’s association with the ICC, we have undertaken pioneering innovations, especially in the digital space, to make the game a more immersive and interactive experience for the fans. With campaigns such as Castrol Activ ‘Cling on to Cricket’ (during the ICC Champions Trophy 2013) and ‘Castrol Activ Scooter Zip factor’ (during the ICC T20 World Cup, 2014) have been trailblazing and successful campaigns. We are indeed excited about using new and innovative technology to make the fan experience more engaging and enjoyable”.