Chitkara University alumnus awarded DAAD Prize 2021: Shipra Dureja, alumnus of Chitkara University, was awarded the DAAD Award 2021 for excellence in academics. The prize is awarded by the German Academic Exchange Service (DAAD) annually by the University of Magdeburg, Germany, to foreign students. 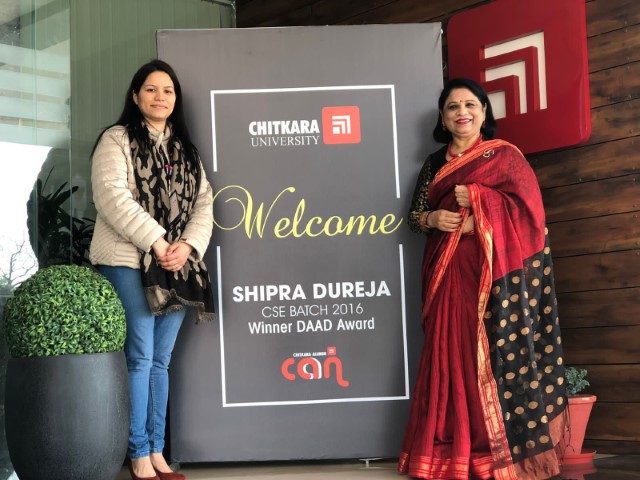 Since 1997, the DAAD Prize has been awarded to a student from the University of Magdeburg with special academic achievements and exceptional volunteer works.

Shipra Dureja completed her Computer Science Engineering from Chitkara University in 2016. After being placed from campus, she worked as a Senior Development Engineer for three years.

She began her Master’s Degree in “Data and Knowledge Engineering” at the University of Magdeburg in 2019. In September 2021, she completed her Master’s Degree with a very good grade after just five semesters, making her one of the best and fastest students in her degree programme.

She headed the management team of Academic Club of the Faculty of Computer Science and was also Student Leader for a year. She was active in projects & developed other forms of support for International Master’s students.

Expressing her gratitude to her alma mater, Dureja said, “I owe my success to Chitkara University’s strong academic mentorship, globally relevant curriculum and spirit of enterprise. These things impact a student’s journey in academics and research and have significant importance in the present fast-paced world.”

Congratulating Dureja, Dr. Madhu Chitkara, Pro Chancellor, Chitkara University, said, “Shipra is a committed and inquisitive young woman and was a truly outstanding student throughout her four years at Chitkara. With her outstanding achievements, remarkable social & inter-cultural commitments, she serves as an important role model for other Indian as well as international students. I am thrilled that she has been conferred with the coveted DAAD Award for her performance & volunteer works, making Chitkara and India proud.”

China man dies of Hantavirus – Is it more perilous than...