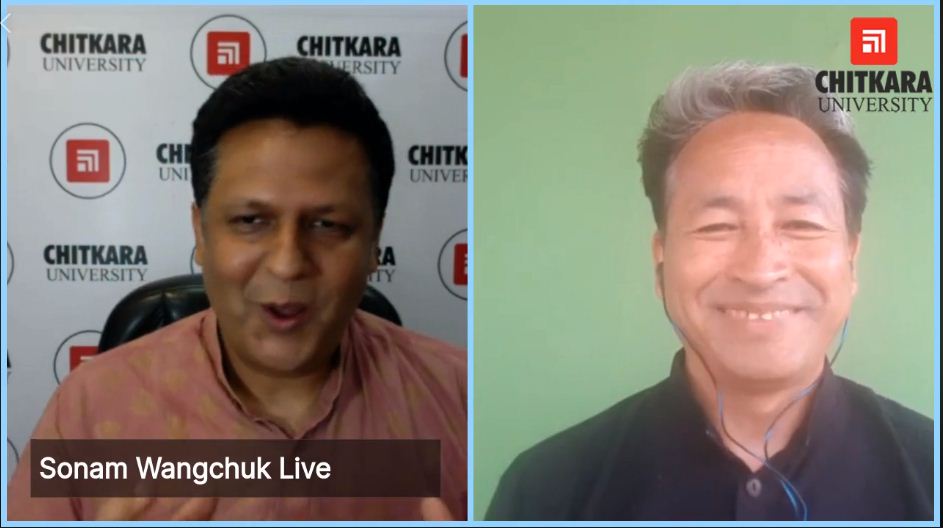 Wangchuk, an Innovator Academician, Education Reformist and the Founder and Advisor of SECMOL ( Students’ Educational and Cultural Movement of Ladakh ) shared his views on “Economics of Giving” in his online live session with students at Chitkara University

Sharing his vast treasure of knowledge in a session which had a wide array of people joining in for the session,  Wangchuk said that any education system must address to the real needs of the time, if our country and planet is facing real challenge from the industrial production then we should change what we teach our children, we increasingly need to start talking about healing the planet rather than further fueling its destruction similarly whatever is the need of time must be incorporated in  the education system. It has to be rooted with real problems and their solutions.

When asked to share his take on innovation Sonam Wangchuk highlighted the fact that most of the innovation that we see around us these days is not something which was done keeping local factors and India specific solutions into consideration. Stating an example he said “we see these glass buildings in Delhi that were copied from the architecture of western cities with sub zero temperatures.

There, this type of architecture has a meaning to it because it helps in keeping those places warm in chilly cold conditions but the same architecture Indians cities like Delhi where it is already very hot, this architecture will not be of any use it would rather end up creating more problems as then it leads to us to air conditioning causing huge costs of electricity bills and health and environment issues..

On his recent views on Boycott China Movement, Wangchuk said that let there be more indigenous products manufactured locally and something that creates more employment and gradually weans off the addiction and dependency on Chinese goods and products, the world is looking at exploring India for setting up big ventures. We should not have short term reactions which will yield no results but need to strategize by taking a middle path and built up our capacities.

On innovation to prosper he said more and more government partnerships with young entrepreneurs in their businesses will be an encouraging factor, rather than flat and higher taxes on industry. This was a new economic model he suggested.