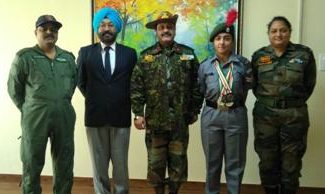 Jasleen has big aspirations and wants to join Indian Air Force as a Fighter Pilot. The remarkable feat was achieved due to support from NCC and sustained guidance and practice under the able leadership of my CO Wing Commander M R Pandeya and staff of No. 1 Chandigarh Air Sqn NCC, She says.

Buyers from across the country visit Farm Tech and Implementex at...