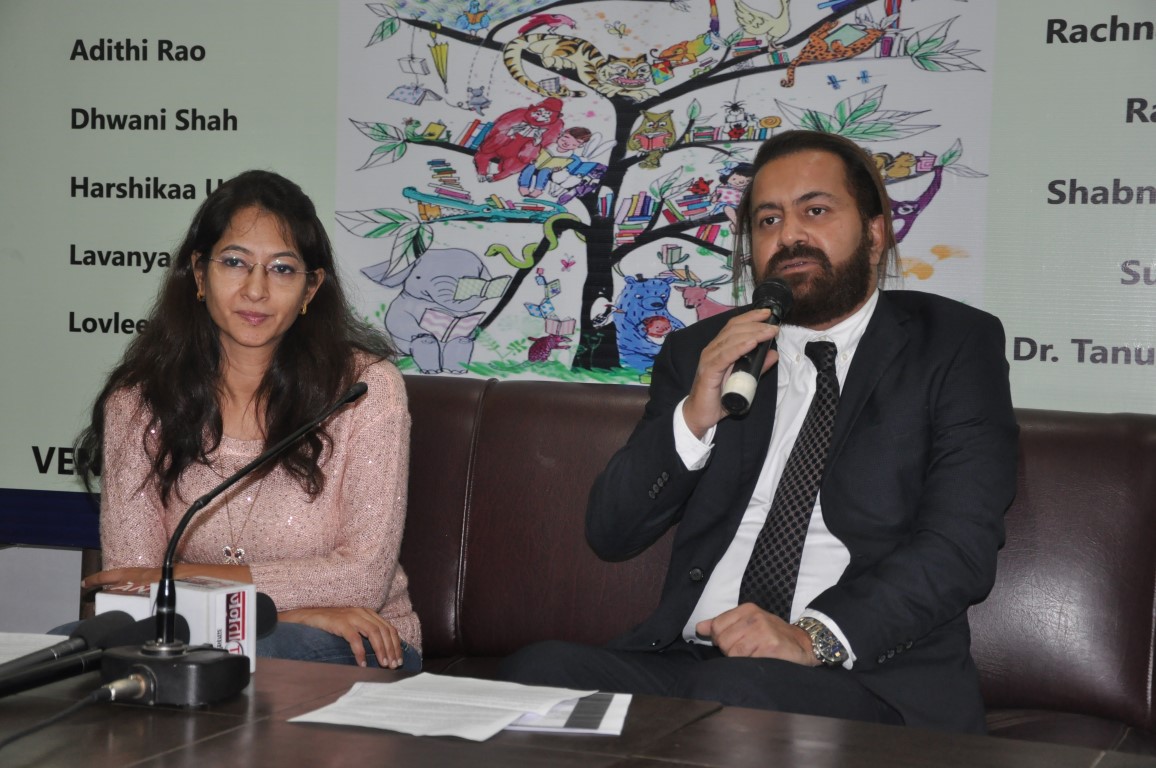 According to Mitul Dikshit, , “The much-awaited fifth iteration of the two-day festival will see a diverse set of activities for children. Interactions with authors,  will be aimed at stimulating the imagination of children. This year we have many award winning authors participating in the festival & have also expanded our canvass to include a very interesting session on the tribal art of Gond with a celebrated expert Subhash Singh Vyam, there will be exciting Illustration(comic drawing) sessions too.”

Chatura Rao said, “The motive of the festival is simple: to enthuse children to develop an interest in reading books & in creative writing.We have something for all children in the age group of 4-18 years. The literature festival will host a number of speakers and conduct many sessions for children, which include storytelling, creative writing, art & craft, talks, poetry and dramatized readings. It will also include sessions  covering various aspects of literature like Creative Writing which will include Character Building & genres of Fiction, Non-Fiction, Horror etc story writing.” It is noteworthy that Chatura Rao, is an author whose books for children and adults are published by leading publishing houses. Known for penning books for children like ‘The Case of Disappearing Colour’, ‘Growing Up in Pandupur’, ‘Nabiya’ and ‘Gone Grandmother’  her  latest short stories appear in the Flipped Anthology Book 1: Funny Stories/ Scary Stories.

The list of Children’s authors, illustrators and storytellers who will be participating in the festival is enviable. Author of five children’s books Shabnam Minwalla who won the ‘Rivokids Parents and Kids Choice Award’ for her first book The Six Spellmakers of Dorabji Street will let the creativity of children flow in her workshop ‘A pinch of magic’ where children will dream up their very own superhero; cook up rhyming spells; and plan ghastly menus. Writer Harshikaa Udasi will take a session around her book Kittu’s Very Mad Day. The book was one of the winners of the Children First Contest for portraying children with disabilities as ‘children first’. It was also shortlisted for the MAMI Word to Screen 2017.

Winner of the 2006 Commonwealth Press Quarterly’s Rolls Royce Award, writer, Rachna Bisht, will introduce aspirants to the vast variety of careers in Army – from flying helicopters to cyber warriors to skydivers to Everest summiteers to civil rescue heroes. Accompanying her to address the children is a very special guest Lt. Col R.S Jamwal a famous mountaineer – Summiteer of Mount Everest three times – 2016 being the last. He has participated in 24 mountaineering expeditions across five continents.

Payal Kapadia will delve into her book ‘Horrid High’. She is the recipient of the 2013 Crossword Book Award (Children’s Literature) for Wisha Wozzariter.

Children will also get a taste of the folk and tribal art form of Gond paintings- paintings that is practiced by one of the largest tribes in India with whom it shares its name.  Subhash Singh Vyam one of the most talented artists of the Gond School of painting will hold a session on his book Water with the illustrator Dhwani Shah an illustrator and graphic designer from Mumbai.

Creator of the Ninja Nani series Lavanya Karthik who won the first Vani Foundation Children’s Literature Fellowship in 2014 will help children draw comics. It is notable that her picture book, ‘Neel on Wheels’ was judged one of the winners in the Children First contest in 2016.

There is an exclusive session planned for parents by Dr. Tanu Shree Singh who is a Professor of Psychology, specializing in Positive Psychology. Her book Keep Calm and Mommy On is much loved and acclaimed.

The organizers also said that entry to the festival is free and open to all. Many of the school groups have registered to attend the festival; however individual entries are most welcome.

What You Can Gain from Studying Integral Psychology