NewZNew (Chandigarh) : Steeped in Swiss tradition and folklore, ‘Fondue’ a traditional Swiss delicacy is a name synonymous with the winters and eating together. With the winters about to come to an end, it is time to make the most of it. So that its patrons do not miss out on the best food experiences for winters, JW Marriott Chandigarh has decided to bring something which has never been cooked in the city before! 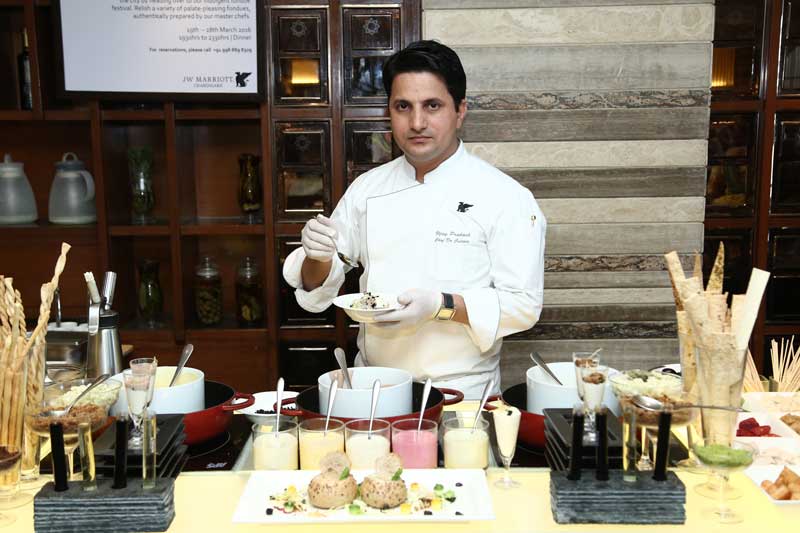 Offering its patrons the opportunity to immerse in the culinary history of the scenic Switzerland, JW Marriot Chandigarh is organizing the ‘Festival De Fondue’, its Fondue festival, at The Café@JW from 19th March to 28th March, 2016. Enabling guests to dip into Swiss traditions, the ‘Festival De Fondue’ will allow the guests to relish traditional & modern ‘Fondue’ delicacies.

“For Festival de Fondue, a live interacting setup will be done by our expert chefs at The Café@JW where they will serve delectable ‘Fondue’ delicacies at the ‘Live’ counter along with the regular buffet menu on offer. Some specialties from ‘LIVE’ counter will be White wine and cheddar Fondue, Red wine cheese Fondue, Beer Fondue, Parmesan soup Fondue, Chocolate Fondue, Artichoke Fondue and Olive and Balsamic ripple Fondue”, shares Pallav Singhal, Director Food and Beverages, JW Marriott Chandigarh.

From the time of its inception, Fondue recipe has evolved over and over again, retaining the traditional recipe while inculcating new innovations and modifications to come up with large variety of Fondues. From the traditional Cheese Fondue made by melting two different types of cheese in wine inside an earthen pot to the evolutions like the Chocolate mousse or Beer Fondue, there is a Fondue to please the palate of everyone. The Palate-pleasing and thoroughly tempting ‘Festival De Fondue’ at The Café@JW will allow the patrons of JW Marriott Chandigarh a chance to relish both traditional and modern Swiss fondue specialties.

Fondue Food Promotion shall be available at dinner at The Café @ JW till the 28th March’16 and can be enjoyed for just INR 1400 per person (exclusive taxes) and INR 1200 (exclusive taxes) for the Sunday Brunch on the 27th March. To savor the authentic Swiss flavours head to The Café@JW and you can also reserve your table at 0172-3955555.

Farmers to protest at Raj Bhavans on June 26 against farm...