39-year-old Igor started feeling weak and found it difficult to walk in 2009 at his home town Odessa, Ukraine. Doctors at Odessa were unable to diagnose his problem accurately and were giving treatment for the symptoms of breathlessness and fatigue. Later in the year 2014, it was diagnosed that he had an Interstitial Lung Disease (ILD), wherein he had developed extensive fibrosis of his lungs which prevented them from functioning properly. 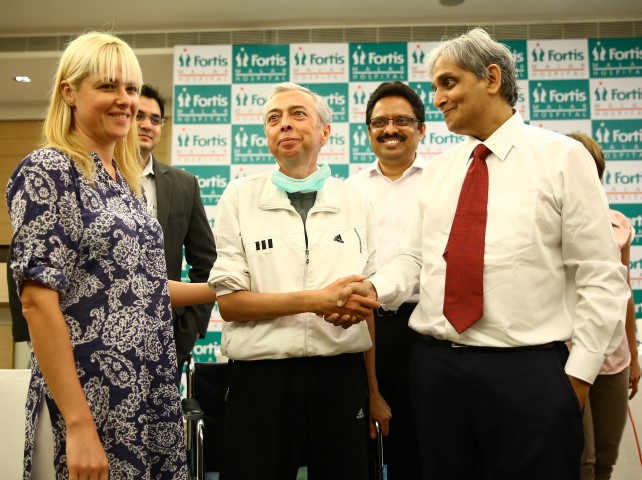 Due to this, the oxygen saturation in his blood circulation had dropped below 70%, despite oxygen support, which in turn made him very weak, making his lungs deteriorate further. Igor was advised to undergo a lung-transplant. He stopped walking last September and was in a wheel chair. Soon all his leg muscles became unusable.

After consulting with doctors in Germany and a few other European countries, where he did not receive a satisfactory way forward, Igor, now 46 years of age, landed in Chennai with an uncertain future lying ahead of him. Even though his name was placed in the cadaver organ waiting list, the initial condition of Igor made his doctors to believe that he was not fit for a lung transplant, since his body was very weak. Igor came to Fortis Malar, Chennai in May 2016 supported with external oxygen. Soon, his condition deteriorated, needing mechanical ventilation, and became septic with low blood pressure. Despite a ventilator, his oxygenation was very poor sand he was placed on a ‘Veno-Venous ECMO’ (Extracorporeal Membrane Oxygenation) where his blood stream was diverted from the veins to an external machine that would oxygenate the blood outside of the body. The purified blood was then sent back to the vein itself from where it reached the heart and pure oxygenated blood was supplied to the entire body via the arteries. On ECMO and ventilation, he was barely alive and three times had a near cardiac arrest due to machine clotting.

The Veno-Venous machine did its job perfectly well for almost 30 days and Igor was kept alive. However, like any other end-stage disease, only an organ transplant surgery was the final solution to Igor’s problem. The painful wait was finally over on the 3rd of June 2016, when a pair of lungs suitable for Igor became available from a donor family.

Though the expert team made sure the transplant was successful, his weakened respiratory muscles were not able to support normal breathing. As another attempt towards saving his life, a tracheotomy was performed and he was made to breathe through an incision made in the wind pipe through the neck. Igor’s problems did not end there as another challenge was thrown at the doctors, a dehiscence (leakage) developed between his bronchi and the newly implanted lung. The doctors immediately performed an ‘Endo-Bronchial Stenting’ to repair the air leakage. The first ever incidence of stenting performed on an implanted lung in India. The patient remained in the ICU for another month and finally at the end of July he was weaned of the oxygen support. The 46-year-old man finally breathed on his own after almost 10 months and breathed freely after 7 long and painful years.

Gradual physiotherapy and nutrition ensured that he gained his strength back and let his new set of lungs take over their job properly. Igor has started to move and even started to climb stairs with a smile which loudly announces ‘I have defeated my bad fate.’

Dr KR Balakrishnan, Director, Cardiac Sciences, Fortis Malar Hospital, Chennai said “To get someone back to life from this condition is incredibly difficult. If on ECMO and ventilation, your oxygen saturation is Jess than 80% for over a month, chances of successful lung transplant are very poor. In most countries, organs are denied to these patients as they are consisted beyond salvage. Igor’s recovery is a lesson for all of us. It is a lesson we have learnt on what is possible with modern intensive care and of course, a patient’s will power and determination.”

Commenting on the post-operative management for Igor, Dr Suresh Rao, Head, Cardiac Anaesthesia and Critical Care, Fortis Malar Hospital, Chennai said, “Igor was on life support for a month, when the family consulted doctors abroad and did not receive clarity on the way forward since his survival chances seemed slim despite a lung transplant. But the family wanted to try their best. We had some tense moments when the bronchi developed a dehiscence in the post-operative period, which led us to perform an endo-bronchial stenting, which ultimately saved Igor. This is the first ever instance in India, of an endo-bronchial stenting being performed, for a lung transplant patient.”