Ayurveda, the world’s oldest oriental Healthcare System is now fast reaching and making its presence felt in the occidental world, where the people are now turning to this system for its holistic treatment so essential for creating a perfect balance of body, mind and soul, and thus for leading  a healthy, happy and peaceful life. 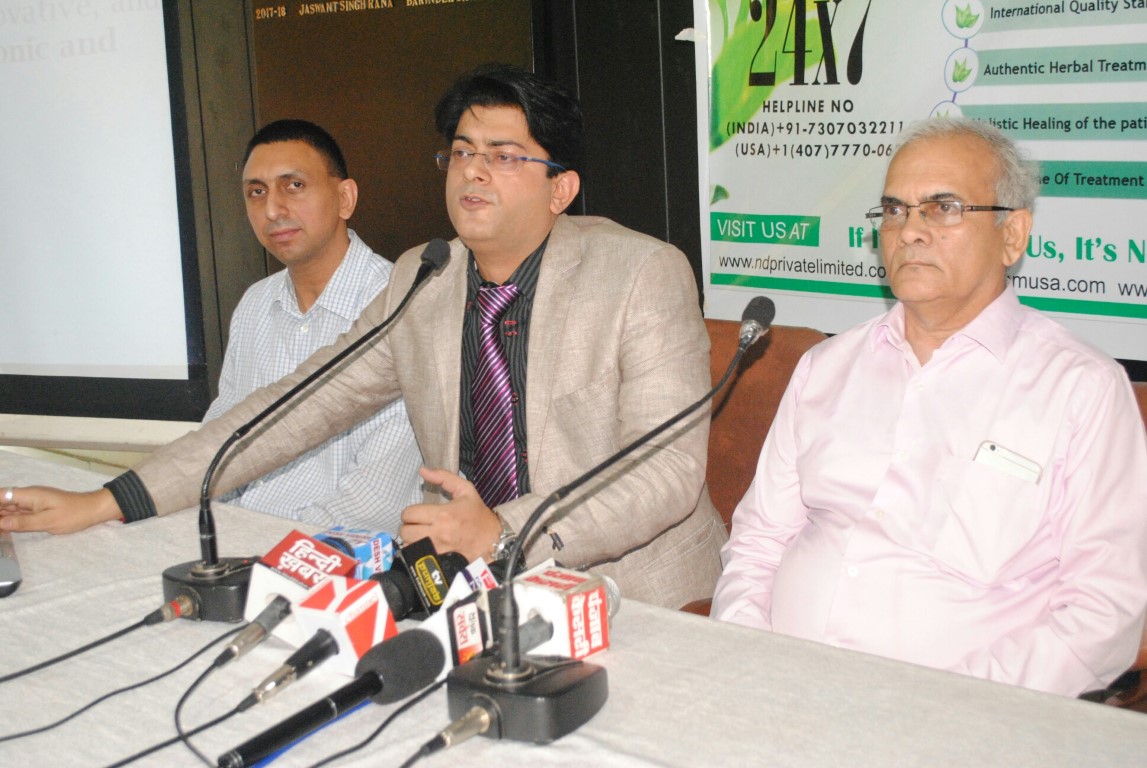 Many significant steps in this direction are being taken (including the ones by the Indian government too), one of which was in the form of 4th Svastha International Conference on Ayurveda and integrative Medicine, organized by the Middlesex  University, London in collaboration with the college of Ayurveda on 21st and 22nd oct, 2017.

It is a matter of immense pride and legitimate honour not only for India but also for the entire Ayurvedic fraternity that Dr. Navdeep Sharma from ND Care Nirogam, Pvt. Ltd. was invited by the Middlesex University, London, U.K to present a paper of his research. The main theme of this conference was “Mental Health and Elderly Care”.

ND Care Nirogam, a globally renowned Ayurvedic Healthcare Centre, has been  providing holistic traditional Ayurvedic treatment based on the latest scientific research for more than 15 years and is successfully running 9 centres globally.

Paper Presentation by Dr. Navdeep Sharma at the Middlesex University: Dr. Navdeep Sharma presented his paper on the “Role of Ayurvedic Herbs in Psychological Disorders w.s.r to Depression” before the Ayurvedic fraternity gathered from all over the world. Referring to the slogan for the World Health Day, 2017 “Depression — Let’s talk” he said that with an ageing population, depression among the elderly is likely to increase in the years to come, with higher prevalence among the elderly than in the general adult population. Decrease in Testosterone is one of the important factors causing depression in the elderly men. Ayurvedic concept of Shukradhatu as well as Vajikarana(Aphrodisiac) dravya herbs like Withaniasomnifera, Chlorophytumborivilianum and Crocus can be used for treating depression.

Talking about India’s expertise in alternative medicine and healthcare that goes back to centuries, Dr. Navdeep Sharma said that Ayurveda, the science of life, is a holistic science that encompasses an overall focus on a healthy well-balanced life by creating a perfect balance of body, mind and soul. The paper was highly appreciated and was published in the concerned journal.

After the paper presentation, an interactive session was held in the University where Dr. Navdeep Sharma participated actively discussing the steps required to make Ayurveda more acceptable globally.

Hailing Ayurveda as a holistic science, Dr. NavdeepSharmaurgedthe British Parliament to uptake Ayurveda as the Mainstream Treatment system in U.K. He  also emphasized that Ayurveda should be a part of the academic curriculum right from the school level as it has a definite edge over other existing sciences in the treatment of many life-threatening ailments.

Dr. Navdeep Sharma believes thatthiswasan unforgettable anda highly satisfying experienceto share his expertise with the Ayurvedic fraternity In Britain, a country under whose rule there was a marked decline in the popularity of Ayurveda, was now eager and highly enthusiastic to promote Ayurveda. The international conference, he feels, was the right platform for him to share his experiences.He feels delightfully satisfied about the interest and the preference that the other countries have now started showing for the Ayurvedic treatment of various dreadful diseases affecting mankind today. He also expressed his hope that the Ayurvedic Fraternity all over the world will join hands to make the world aware of the efficacy of Ayurvedic treatment of various life-threatening diseases. In continuation with this endeavour, Dr. Navdeep Sharma isgoing to UAE to participate in the first International Conference and Exhibition on Indian Medical Systems, at the Dubai World Trade Centre from Nov. 9 to 11.

Dr. Navdeep also updated that there is a need to provide 24*7 patient support to patients opting for Ayurveda treatment in critical diseases that is why ND Care Nirogam Pvt. Ltd. maintains a 24*7 helpline number 7307032211 for all its patients and a dedicated patient website www.blissways.com for its patients.

At present Dr. Navdeep Sharma has reached such a stage where the patients suffering from chronic and dreadful diseases from the world over are approaching him very optimistically for the treatment.