Air Serbia, in which Etihad Airways has a 49 per cent stake, launched its five-times-a-week scheduled flights between its Belgrade hub and New York JFK International Airport, marking a return of direct air links between Serbia and the USA after a 24-year absence. The route is being operated with an Airbus A330-200 aircraft.

Etihad Airways, together with three of its seven equity partners – Jet Airways, Alitalia and airberlin – played a key role over the past six months to prepare for the new route launch. From engineering, fleet planning and technical support, pilot to cabin crew training, and marketing, legal and guest service backing, the true spirit of partnership and resource sharing was evident – fundamental to group strategy to drive efficiency and create synergy. 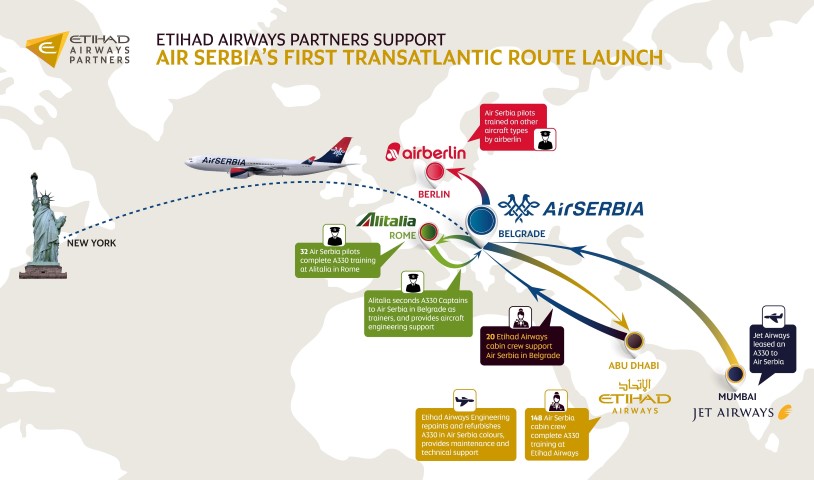 By working together in different areas of the business, the equity partners were able to drive benefits, achieve significant economies of scale and, most of all, show how the investment business model that Etihad Airways has successfully developed, was delivering results.

“Cooperation and collaboration between the equity partners has been second to none,” he said.

“The Etihad Aviation Group is all about driving innovation and efficiency, and as our equity investments mature, so too, will the benefits and synergies become more apparent. By developing our unique equity strategy over the past four years, we have created a compelling alliance of partners to share business and cost synergies that are driving benefits straight to the bottom line.

“We have developed our global network significantly, and in doing so, shared massive cost synergies that demonstrate a commitment to work together to reach our goal. We invested time, effort, resource and manpower to initiate, drive and develop these relationships.

Mr Hogan, who is also Vice Chairman of the Supervisory Board of Air Serbia, added: “The introduction of non-stop services between Belgrade and the Big Apple is a terrific achievement for Air Serbia that underlines its progress so far as well as the strength of its business strategy.

“On top of that, it demonstrates the benefits of Etihad Airways Partners, whose member airlines provided support every step of the way, with Air Serbia pilots undergoing training in Rome with Alitalia, the cabin crew completing service and safety training in Abu Dhabi with Etihad Airways, and the A330 being leased from Jet Airways.”

The New York service has been conveniently scheduled to provide long-haul customers with easy onward connections over Belgrade to cities across Europe, working with Etihad Airways Partners to increase network reach.

The aircraft is configured with 254 seats, features menus inspired by Serbian cuisine, fully lie-flat seats and inflight entertainment systems at every seat with the latest films, music and TV shows in English and Serbian.