NewZNew (Chandigarh) : According to a latest report by 9Apps, an average Indian user installs no more than 32 apps (lower than the world average) and only 26% users have Hindi language apps. 9Apps, one of the most popular Android apps store with 140 million monthly active users worldwide, has released an apps trends and insight report on the Android app market. According to the data compiled, most mobile users continue to download apps via 2G network and prefer offline playback versus online streaming amidst sporadic connection. WhatsApp, Facebook, Instagram and UC Browser were the top apps of 2015 whereas Flipkart, Snapdeal, Amazon and Paytm remain the most popular ecommerce apps. 17% of all daily app downloads continue to be games – with car racing and action games being most popular. India is Asia’s fastest-growing mobile gaming market with revenues expected to cross 1 bn by 2018 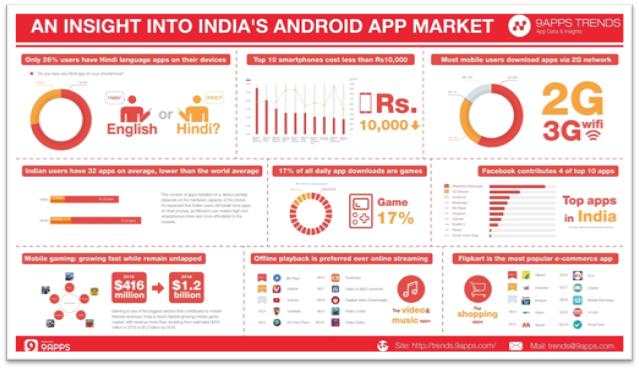 A data platform to inspire developers

“We want to build a platform where all Indian developers can catch up with the trends in the app world,” says Ebrahim Popat, Country Manager of 9Apps. “With the help of our actionable insights into users and local app trends, developers are able to keep themselves at the forefront of the app tide, understand what’s trendy and what attracts users, and make informative decision in developing the next hit app.”

9Apps Trends is a public web facility with free access to all. 9Apps Trends, which includes Overall Ranking, New Ranking, Top Searched, Top Installed, and other indexes, well represents the app market movements of millions of users – 9Apps is able to process and interpret the huge data generated via over 18 million daily app distribution. For instance, 9Apps Index, an index number originally created by 9Apps (ranged 1~100), is based on the massive download data from 9Apps Store which reveals how often a particular app is downloaded relative to the total number of app downloaded on 9Apps Store. Apart from trends, it also offers the best-in-class data analytics products & services and insightful app data reports to developers.

India, the 2nd most populous country in the world, has reached around 300 million mobile internet users in 2015, according to the latest report by IAMAI and is poised to be the next big app market in the world. 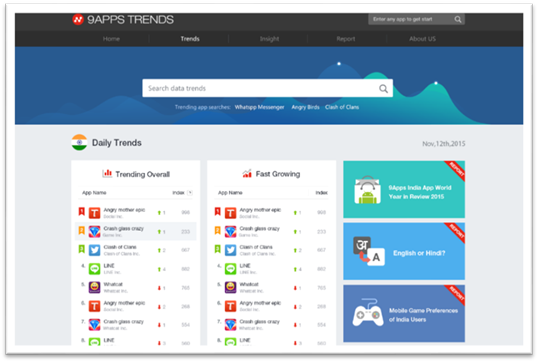 “We want to share the big data and our insights with the industry about mobile app user behaviors. I hope this can help us better understand India’s thriving mobile app market”, Ebrahim added. The report will help Indian mobile users keep up with the trend, and enable app developers to perceive the ever-changing need in the market and twist their business tactics accordingly.