First of its kind Wheelchair Band Flowing Karma launched: Their bodies may have suffered damage but not their undying spirit! This group of seven young men have come together to form first of its kind music band on wheelchairs. 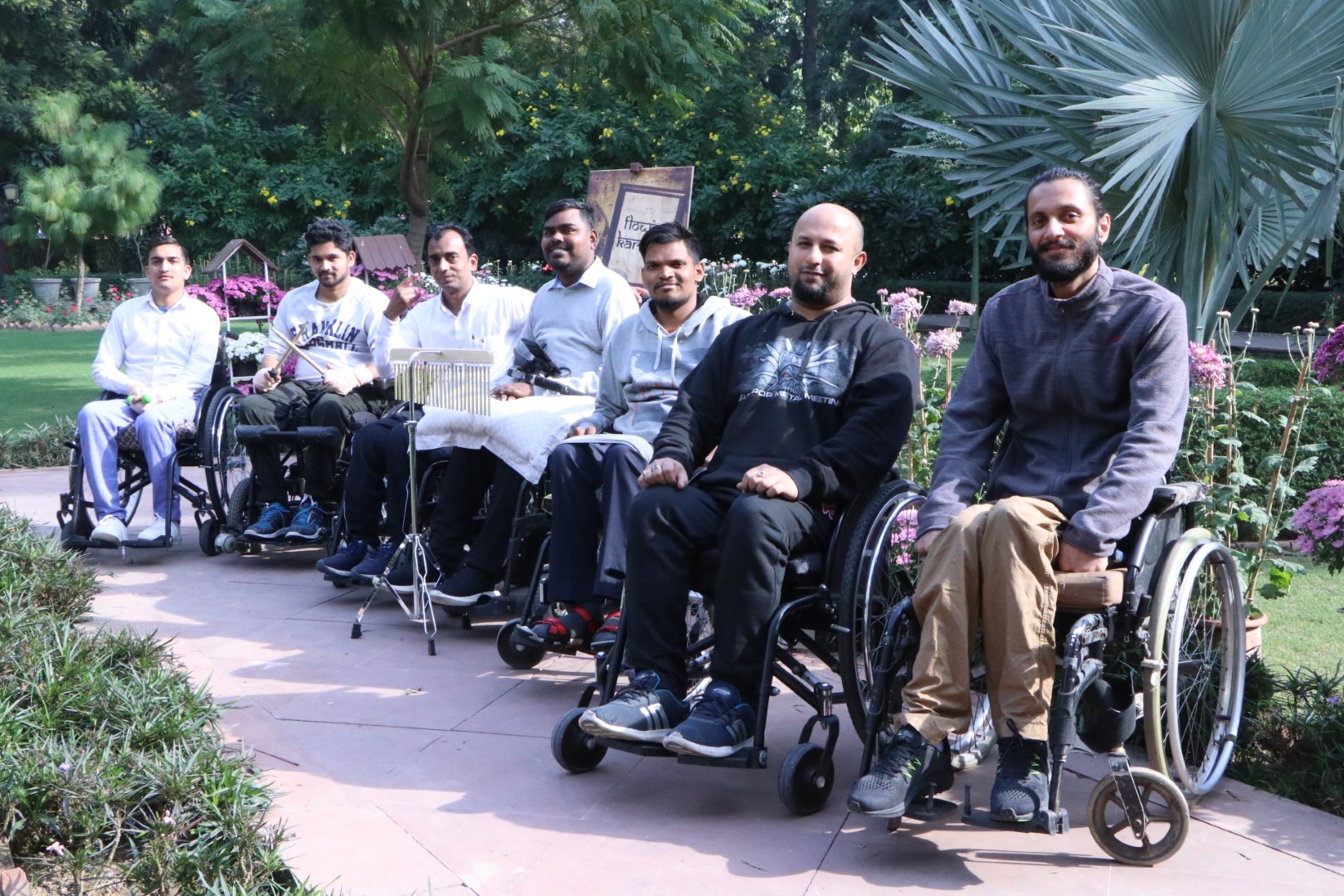 The seven-member band by the name of Flowing Karma is excited for having got an opportunity to perform with renowned Bollywood singer, Tochi Raina at a musical evening at Chandigarh Spinal Rehab in Sector 28 here on Friday! All of them are going through rehabilitation at the rehab centre for acute disabilities like spinal cord and brain injury.

The band, which was officially launched today has already performed at Elante Mall, DT Mall and Sector 17, and aspires to come up with its own album someday. They are all youngsters with most of them in their twenties, and their determination to live a meaningful life is undeterred despite having been left paralysed by mishaps.

Mrs. Nicky P. Kaur, Founder and CEO of Chandigarh Spinal Rehab said, Sometimes KARMA can knock us down, even cripples us. Then the spirit comes alive in full glory and Karma flows once again From destruction to joyous creation!

“How Karma first brought them on to wheels, from legs on to their wheels and then started the journey of their wanting to rise above in their spirit and truly rise they did. They created their own music. They moved on to a world of dreams, together they tried to explore a world of possibilities. They didn’t look at the limitations and this is how Karma moved on from a space of abject misery of loss to a world of gains and excitement, and possibilities. That is how they took charge of their Karma they rose on top of it, and they flow in a Karma of music of creation”, she added.

39 years old Tridib Chaudhary from Bogaigaon, Assam, the band leader, explained, “All of us face challenges in life like anyone else but we have learnt to cope with them.” A nasty fall had left Tridib paraplegic and as soon as his condition improved after rehab, he again started practising guitar which has always been his passion.

Sandeep Singh, 31, from Asansol, West Bengal, who plays the keyboard and is the lead vocalist, had two years ago suffered a bullet injury which left him paraplegic. When he came to Chandigarh Spinal Rehab, he was bed ridden but, as soon as he recovered, he was more confident about living an independent life. He also had a keen interest in music, which is why he wanted to become a part of the Flowing Karma.

Ashish Verma, 28, from Narkanda, Himachal Pradesh, a guitarist is determined to play on stage with Tochi Raina even when he is just out of the ICU. He has been paraplegic for more than 6 years after meeting an accident. Ashish Verma after coming to Chandigarh Spinal Rehab for Rehabilitation has also discovered his latent  talents in the field of wheelchair sports and now music.

The youngest member of the band, Rajeev Kumar, 24, hails from Kangra in Himachal Pradesh. He was left quadriplegic after he fell down from a tree about 6 years ago. Being a quadriplegic, he is not able to use his hands as well as legs. The rehab centre has created a special kind of shaker for him that needs to be tied to his hands with the help of crepe bandage and he spends hours practicing it.

29 year old Rahul Singh, belongs to Lucknow and holds a BTech degree. While on his way to give his exams, he met an accident that left him with severe Spinal Cord injuries. Chandigarh Spinal Rehab bought an octopad for him but, since his limbs are not much in control, he was not able to hold the sticks properly. The team here modified the sticks and, now, he plays it with more confidence.

A dive in shallow water of the swimming pool left 25-year-old Subham Ware from Pune, Maharashtra, quadriplegic (i.e. no control over hands and legs). He is simply unstoppable with his mouth organ and his passion for music is enviable.

Ajeya Raj, 28, from Garhwa, Jharkhand, who plays chimes, got into a road accident while driving a bike in 2006. This accident left him with complete quadriplegia which meant he became unable to control his all four limbs. He likes to do all his works by himself and he does all the grocery shopping all by himself using his chin controlled motorized wheelchair.

The band will be performing with renowned Bollywood singer, Tochi Raina at a musical evening at Chandigarh Spinal Rehab, Plot 1, Sector 28, Madhya Marg on Friday at 6 p.m. and the entry to the event is free and open to all.

nBEYOND – Celebration, convention destination to take you ‘beyond’