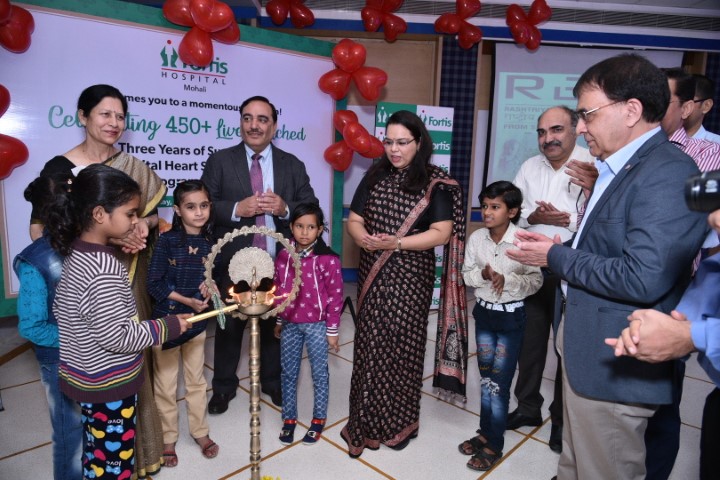 The event was held commemorating the feat of treating over 450 successful Congenital Heart Disorders.

Over 50 children who have been successfully treated were invited along with their parents to share their success stories. Rajiv Arora, IAS, Additional Chief Secretary – Haryana Health Department, was the chief guest on the occasion. Abhijit Singh, Zonal Director, Fortis Hospital Mohali was also present on the occasion.

Fortis and RBSK have been united by a common cause, which is the treatment of children suffering from Congenital Heart Diseases. Over 2 to 2.5 lakh children are born with congenital heart defects in India and approximately 70,000 of these requires surgery/intervention in first year of life without which they will not survive, given that such advanced form of treatment is not accessible to most of the affected families.

Only a few tertiary care hospitals are equipped with required infrastructure and manpower and cost of these surgeries even at government hospitals is out of reach of many of these families.

RBSK has facilitated thousands of such surgeries at a tertiary level, free of cost under NRHM for children diagnosed with illnesses. Whereas Fortis has extended its undeterred support by extending their state of the art infrastructure which include advanced cardiac operation theatre, cardiac catheterization lab and paediatric cardiac ICU and team of expert doctors.

Dr. T S Mahant, Director of cardiac surgery at Fortis Hospital, Mohali said, ‘We feel really proud to have been able to support such a noble cause, where we can extend our expertise to the less privileged’’. It’s an achievement of sorts to bring a Smile on a child’s face. We are thankful to RBSK, Haryana for playing a big role in the management of this problem.

Dr. Rajat Gupta, Paediatric Cardiologist at Fortis Hospital, Mohali said, ‘’Burden of congenital heart defects in India is enormous and Rashtriya Bal Swasthya Karyakram is a boon for such patients & their families. By offering early detection and timely referral to tertiary care hospital for their free treatment, they are doing a great service to the state & Nation’’.

Fortis Hospital, Mohali and RBSK have collaborated since 2017 for this noble cause and met great cooperation from Haryana Government, which has taken upon the task of treating congenital defects of children and made significant progress in reducing mortality in children over the last several years.

Young Entrepreneurs of Chandigarh Launch “Worth It” App