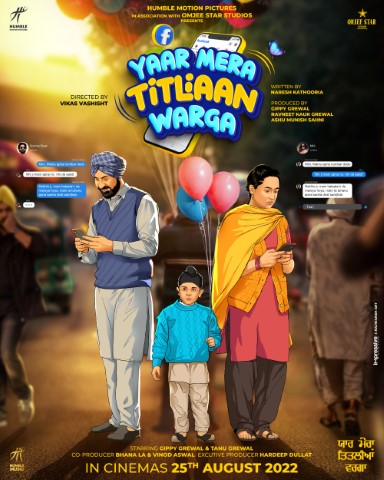 Presented by Humble Motion Pictures in association with Omjee Star Studios, the cast includes Gippy Grewal and Tanu Grewal in the lead role.

Along with the duo, fans will also see Karamjit Anmol, and Raj Dhaliwal along with an adept star cast. The story is directed by Vikas Vashisht and marks his directorial debut whereas it is written by Naresh Kathooria. The film is produced by Gippy Grewal, Ravneet Kaur Grewal and Ashu Munish Sahni, co-produced by Bhana LA and Vinod Aswal.

Gippy Grewal introduces a new concept wherein the storyline depicts today’s social media obsession and digital misunderstandings of the new age. The poster is also unique and the first of a kind in Punjabi cinema, as the name ‘Yaar Mera Titliyan Warga’ of the movie suggests, surprisingly the face-off sounds unbelievable for the characters.

So, save the date for the realistic journey of what social media portrays; incidentally, it would be intriguing to watch what the story brings forth to the audience, to be released worldwide on 25th AUGUST 2022.