Grievously Injured Firearm Victim Walks Back Home after Gruelling 4-Hour Surgery at Fortis: For 36-year-old Narinder Ahuja of Patiala, it was like getting a new life. In a firing incident, he had suffered life threatening injury to the right kidney, liver, right lung, spine, neck and the adjoining areas. 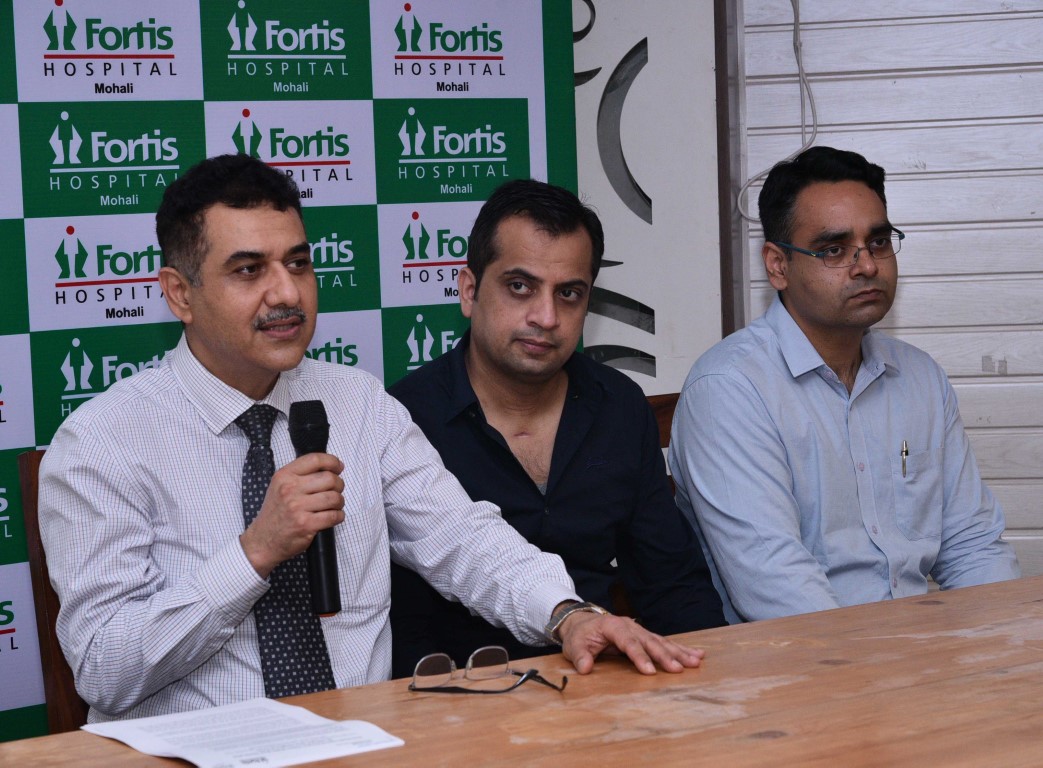 It took doctors at Fortis Hospital Mohali a grueling 4 hours for a successful surgery in which three bullets were removed and his life was saved.

Fatally injured in an attempted homicidal shooting in a brawl at Rajpura, Punjab, this patient was given first aid locally. Since his condition was critical and rapidly deteriorating, the doctors there advised him to be taken to a higher and better-equipped center. His panic-stricken attendants immediately decided to shift him to Fortis hospital, Mohali.

“He was critically injured having been shot a couple of times”, said Dr. Atul S Joshi, Director, Surgery team who received him in the Emergency at Fortis Hospital, Mohali. He was talking to media persons at Chandigarh Press Club here today.

The patient was having difficulty in breathing since one of the bullets fired at the neck was lodged precariously near the windpipe or the airway. The ensuing swelling was rapidly compromising his breathing and adding to the seriousness of his already critical condition.

To make matters worse, he was hit in the chest as well as the abdomen a couple of times leading to profuse bleeding inside his body. While a catheter was placed inside his urinary bladder when he was being revived in the triage, he showed bleeding coming in the urine as well. Dr. Joshi said, “We were in receipt of a patient who was injured in the neck, chest, abdomen, and back, profusely bleeding, with respiratory compromise. The anxiety on the faces of family and friends was a grim indicator of the enormity of damage as to what would have happened at the shoot-out site.”

“The need of the hour was the speed of the treatment, aggressive revival, airway control, blood products and to conjure up a team of all the required experts. The probable success of the effort required to take the patient to the operation theatre as soon as possible.”

The Surgery and the Trauma team at the Hospital were up to the mark and were put into action within minutes in spite of the late evening hours. The initial CT scan done immediately while he was on the way to the operation theatre gave a sense of the grievous and the life-threatening injury to the right kidney, liver, right lung, spine, neck and the adjoining areas. He was seen immediately by all the specialties while being shifted to the operation room namely Intensive care, Thoracic Surgery, Urology, Vascular Surgery, ENT, Spine surgery in addition to the Intestinal surgery experts. Blood products were made available by the blood bank immediately as well.

After a gruelling 4 hour successful surgery, where three bullets were removed, the patient was shifted to the ICU on life support systems. His kidney, liver and intestines needed to be intervened. The patient could be taken off the ventilator soon after. Consequent efforts put in, the patient showed rapid improvement and was able to walk back home after having spent 12 days in the hospital.