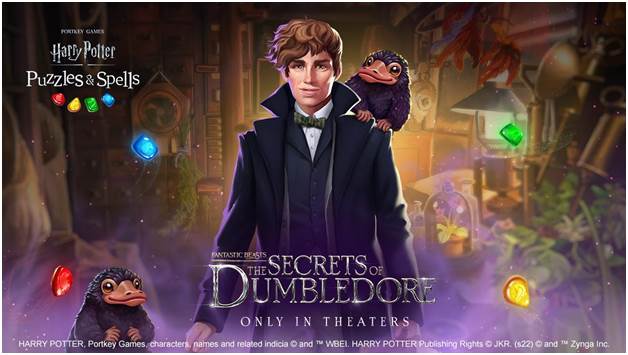 Pictures’ new film, “Fantastic Beasts: The Secrets of Dumbledore,” now playing in theatres worldwide. The events can be glimpsed in this trailer:

By featuring magical characters and creatures from the film franchise, the limited time Fantastic Beasts Celebration invites players to experience the wizarding world of “Fantastic Beasts: The Secrets of Dumbledore” in Harry Potter: Puzzles & Spells. In the in-game event, which runs through tomorrow, famed Magizoologist Newt Scamander appears in the game for the first time, as a guide and host.

As a special event bonus, players can earn badges to collect the Niffler, the lovable magical creature known for collecting shiny objects and treasures. For the first time, players can keep the Niffler as a permanent creature they can use in gameplay going forward – but they need to act quickly to seize their chance.

Players who’ve been swept into the Fantastic Beast Celebration can dive even deeper into Harry Potter: Puzzles & Spells with the special Magical Creatures Season that runs from late April to late May. This in-game event enables players for the first time to unlock the Qilin, perhaps the wizarding world’s most revered magical beast, to help complete Puzzles when activated.

“We’re incredibly excited to announce the latest Harry Potter: Puzzles & Spells in-game event series in conjunction with the release of Fantastic Beasts: The Secrets of Dumbledore,” said Yaron Leyvand, Executive Vice President, Games at Zynga. “The film series has created a massive global fan following, and we are excited that our players can see the film’s most beloved characters on the mobile screen.”

In Harry Potter: Puzzles & Spells, players enter a Match-3 adventure brimming with the spells, humour, colour and characters of the Harry Potter series. Featuring the soundtrack and voiceover recordings from the original Harry Potter films, fans follow an authentic, mobile retelling of Harry’s journey through the wizarding world.

Earning spells and special boosts as they advance, players solve Match-3 Puzzles populated with hopping Chocolate Frogs, fluttering Winged Keys, battling wizard chess pieces and other unexpected obstacles and objects. In the spirit of camaraderie and friendly competition at Hogwarts, players can join or form Clubs with other fans to socialise, collaborate on Puzzle strategies, share lives and vie for Prizes in exclusive Club Events.

Zynga is a global leader in interactive entertainment with a mission to connect the world through games. With massive global reach in more than 175 countries and regions, Zynga has a diverse portfolio of popular game franchises that have been downloaded more than four billion times on mobile including CSR Racing™, Empires & Puzzles™, FarmVille™, Golf Rival™, Hair Challenge™, Harry Potter: Puzzles & Spells™, High Heels!™, Merge Dragons!™, Merge Magic!™, Toon Blast™, Toy Blast™, Words With Friends™ and Zynga Poker™. With Chartboost, a leading mobile advertising and monetization platform, Zynga is an industry-leading next-generation platform with the ability to optimize programmatic advertising and yields at scale. Founded in 2007, Zynga is headquartered in California with locations in North America, Europe and Asia.  For more information, visit www.zynga.com or follow Zynga on Twitter, Instagram, Facebook or the Zynga blog.

Warner Bros. Games is a premier worldwide publisher, developer, licensor and distributor of entertainment content for the interactive space across all platforms, including console, handheld, mobile and PC-based gaming for both internal and third-party game titles. Additional information about Warner Bros. Games can be found at https://www.wbgames.com/.