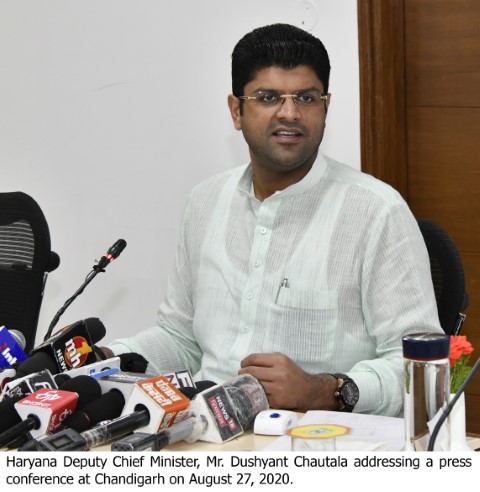 Prior to this, the Excise Department had never collected such high amount of revenue in the first quarter of the year.

Mr. Chautala was interacting with mediapersons at Haryana Niwas here today. The Deputy Chief Minister, who holds the portfolio of Excise and Taxation Department, said that Haryana’s Excise Department has made a new record in the Excise Duty Collection.  He said that neither the rail service nor the multi-national companies were functioning due to the lockdown and COVID-19. In such a situation, increasing revenue was the biggest challenge for the Excise Department. The Department has earned an additional Rs 262,98,42,438 under different heads as compared to last year’s quarter.  This includes permit and retail license fees in addition to excise and additional excise duty.

Mr. Dushyant Chautala shared that the new excise policy could not be implemented in the state from April 1 this year due to the lockdown. The State Government gave permission to opened liquor vends from May 5 under Unlock-1. In the aforesaid circumstances the new excise policy was enforced from May 6. The cabinet has amended the policy and implemented it till May 5, 2021. In such a situation, the Department has collected an additional excise duty of Rs 27,58,28,478 through country made liquor and Indian-made foreign liquor from May 6 till now.

In response to a question asked by a mediaperson, the Deputy Chief Minister said that the GPS tracking system would be installed in the vehicles coming out of the distillery. A committee has been constituted for this purpose, which is also observing the practices in other states and it will be implemented soon. He informed that the process of installation of CCTV is in the final stages and by the end of September all the distilleries will have CCTVs. The DETC has been directed to go to the distillery and check the cameras every 15 days in the districts which have distillery. The Deputy Chief Minister said that electronic temp-proof flow-metres are being installed in all distilleries and it is expected that flow-meters will be installed in the next one month. He said that during the lockdown, an enquiry has been conducted against the officers issuing the permit and pass from March 27 to March 31 and action will be taken against those found guilty as soon as the investigation is completed.

Deputy Chief Minister said that during COVID the state government has imposed a COVID-cess on liquor.  In the first three months of COVID-cess, the Excise Department has earned Rs 74,80,57,183.

Maluka for strengthening of Cooperatives, self-help groups for Rural development