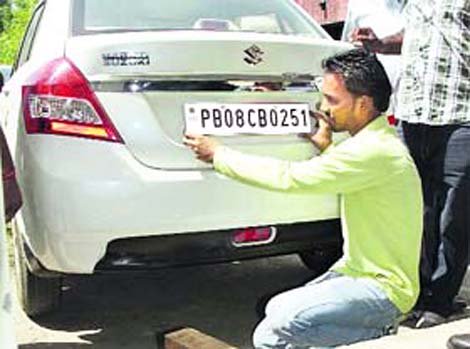 The HSRP project began its operations in the State of Punjab earlier in the year 2011. It came to a standstill post a litigation between the Vendor Company i.e. Agros Impex (I) Pvt. Ltd. and Punjab State Transport Department in the year 2015. The matter has now been successfully resolved as the Court has directed the State to reinstate the original agreement with the vendor company. The vendor company has also been instructed to address certain lacunas in the process.

The Hon’ble Supreme Court is monitoring the progress of the project across all states. In its last order on HSRP, the Apex court has reprimanded several States with respect to the lackadaisical approach towards the implementation of the scheme.

The affixation of HSRP’s is aimed at curbing Vehicle borne crimes. These ‘IND’ Plates provide uniform and standardised manner of display of Registration marks and comes with chromium-based Hologram to protect against counterfeiting. The plates are affixed with non-removable, non-reusable Snap Locks. The front and rear number plates have Unique Alphanumeric Laser Identification Number, which upon affixation on the vehicle gets registered with the Central Database of VAHAN.

The operations of embossing and affixing of HSRP in the State of Punjab have already commenced at Regional / District Transport Authorities of Ferozpur, Faridkot, Nawasheher and Hoshiarpur. The remaining locations will be operationalised within a span of 2 months. All new vehicles registered in the State are mandated to affix HSRP as the Registration Certificate (RC) of the vehicle will be issued only post affixation of the plates. All remaining already registered vehicles in the State of Punjab are also to be affixed with the HSRP’s, for which the State Transport Department and the Vendor company will roll out a schedule once all the districts in the State are covered with the facility of HSRP.

The vendor company has assured that some of the challenges that were faced initially in the project, have been addressed as they have been learning from their operations in other states such as Gujarat and Assam, and they are confident of rolling out the HSRP scheme that will not cause any inconvenience for the vehicle owners of the State.

Instead, they will use technologies such as SMS alerts, appointment system interface, eWallet payments for Dealers  to make the experience seemless for both customers and vehicle dealers across the State. Even issues in the quality of the black foil that used to occassionally get faded in the earlier years have been resolved and customers will not face any such issues.

Customers who have faced this issue of fading of the foil, will be given Free of Cost replacement of the foil on the plate by the Company, once the operations are live in the entire state.

HealthKartPlus extends its operations in Chandigarh, Mohali and Panchkula