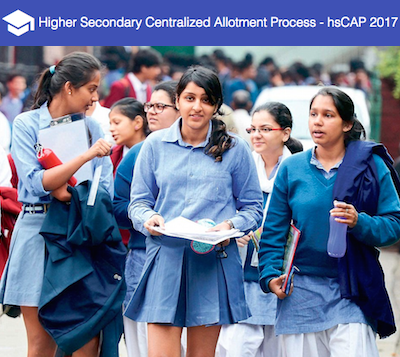 In the second round of allotment to +1 colleges on the basis of SSLC/CBSE/ICSE board marks, a total of 2,86,793 students have been allotted a seat out of the options registered by them, also considering their place in the merit.

Here are the statistics of Plus one allotment 2017 in the second round, as notified by HSCAP.

You can see the second allotment result statistics here in more details but above is the roundup.

Admissions in second round

Students who have got a seat allotted in the HSCAP second allotment, are required to complete their admission formalities on June 27 and June 28, as per the official notification issued by DHSE. For instructions on the admission process, kindly refer to this notification.

Directorate of Higher Secondary Education, DHSE Kerala had invited the online applications from SSLC (Class 10) passed students for merit-based admissions in Plus One (Class 11) across the Higher Secondary Schools in the State. As per the reports, as much as 4,96,347 students registered themselves under HSCAP 2017 in the first round. DHSE had earlier published the trial allotment result on 11th June in which 1,56,907 seats were made available and 1,56,874 seats were allotted. The publication of trial allotment was done to provide the students an opportunity to make alterations in the choices for improving chances of getting allotted a seat.

There are total 4,22,910 seats available in Higher Secondary Schools and the admissions are being made available through single window system HSCAP. Also, 27,500 seats are available in Vocational Schools which takes up the total number of seats to 4,50,410. Total students eligible for Plus One admissions in Kerala are 4,88,086 including SSLC, CBSE and ICSE students.

Sports Quota Allotment: DHSE has recently published the second allotment results under Sports category. Those who have been allotted a seat under Sports quota second allotment round are required to report for Admission on or before 5 pm on 26th June. The registration and verification facility for Sports Achievement under supplementary phase will be activated on 29th June. The supplementary phase application renewal and online submission of application for Sports Quota will remain activated from 1st July to 10th July.

Students give benevolent touch to X’mas celebrations at Aanchal International