Home Business Jaypee Hospital treates nine months old infant from Bhubaneswar for a rare...
Facebook
Twitter
WhatsApp
Email
Print
Manav Nagar (Noida) Team of doctors from Paediatric cardiac department blessed a 42 weeks old baby girl Aahana with a new lease of life by successfully treating her for a rare heart disorder. Before coming to Jaypee Hospital, Aahana’s parents tried every avenue to get their daughter treated. They went to three renowned hospitals but the doctors were not sure about the success of the surgery and warned the parents about the huge risk that was involved in the surgery. Dejected, they tried searching for a hospital that had successfully treated such cases in the past and finally, reached Jaypee Hospital for treatment in late September. At Jaypee Hospital, Aahana was successfully operated by Dr. Rajesh Sharma, Director, Paediatric Cardiac Surgery Department and his team. Baby Aahana returned back to Bhubaneswar recently in November after recovering completely. 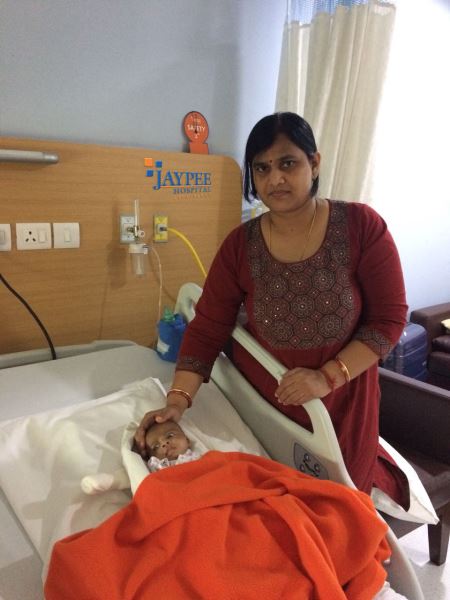 Aahana was detected with Ventricular Septal Defect (V.S.D.) before she was born but since the defect could be treated; her parents went on with the delivery. Later on post delivery it was found that the baby also had an additional complication called Coarctation of the Aorta (C.O.A.).  COA is a situation where in Aorta, the major artery that carries oxygen-rich blood from the left ventricle to the body, is narrower than it actually should be. This affects blood flow in the body and causes further complications due to PAH. Aahana was just 14 days old when she had to be admitted to a hospital in Bhubaneswar where she was kept on ventilator for a month. Because of not getting a satisfactory treatment there, the baby was then brought to a super speciality hospital in Delhi for treatment where she underwent a procedure called ‘Balloon Dilatation of Aorta’. The procedure was successful but Aahana caught infection in the hospital that deteriorated her condition further. After this the baby was again shifted to another hospital in Gurugram where her sepsis was managed for about 7 days but due to non availability of effective treatment in the hospital, the baby was finally brought to Jaypee Hospital, Noida.
Also Read :   Prestigious Double Helical National Health Award, 2017 is awareded to Dr T S Mahant from Fortis Mohali

Explaining about the case, Dr. Rajesh Sharma, Director, Paediatric Cardiac Surgery Department, Jaypee Hospital, Noida explained, “In normal condition, the wall between the chambers closes before the fetus is born, so that till the time of birth the oxygen-rich blood doesn’t get mixed with the oxygen-poor blood, but this was not the case with baby Aahana. The patient had Ventricular Septal Defect (V.S.D.) that refers to a hole in the wall separating the two lower chambers of the heart. This causes higher pressure in the lung and reduced oxygen supply in the body. Aahana had a big hole in her heart and her Aorta that supplies the blood to the whole body was extremely narrow. The criticality here was that Aahana was a premature baby who weighed just 2 kgs and also had a history of Sepsis. Keeping all these complexities in mind, the patient was monitored day in and day out for about 55 days before surgery. Considering the history of the child and complications she had already faced, she was given broad spectrum antibiotics and anti fungal for proper recovery.”

Dr. Rajesh Sharma further said, “Although, we performed a successful surgery, but due to suffering through a pre-operative morbidity, the patient’s heart had become very weak. Hence, we had to keep her on ventilator for quite a long time. We tried reducing the ventilation a few times but we couldn’t do that.  Due to this diminished respiratory reserve, the patient was taken for ‘Tracheostomy’ with which she was helped gradually to come out of ventilation through Non-invasive ventilation to facilitate weaning. Later nutrition was further optimized. Finally the patient could come out of tracheostomy on the 28th day of surgery.”

“Considering the high risk of post-surgical infections, we had to design her prescription with IVIG and high-end anti-microbial to improve the body resistance and to make her heart and lungs function properly, essential medicines were given to her. On the 35th day, baby Aahana was shifted out of ICU and oral feeds were given to her. The patient now is ready to get discharged. Her parents were also advised on taking proper precautions and care for her early recovery,” Dr. Sharma added.

Dr. Rajesh Sharma said, “When Aahana was brought to Jaypee Hospital, her heart and muscles were barely functioning. Her condition would have become severely critical, if she had not been given proper treatment immediately. Considering the risk that baby Aahana had and the number of challenges that the family had to face before coming to Jaypee Hospital, I would like to advise people that critical diseases can happen to anyone but having proper awareness about them and timely medical intervention can reduce the risk of condition getting deteriorated.”
“Our baby had gone through extreme situations and challenges since the day she was born. During her treatment she had multiple cardiac failures and infections. Her platelets were also going down day by day. Despite facing so much she kept fighting with this chronic disease. I myself being a doctor can understand the risks that were involved and the efforts that were being taken by the doctors here. We are really thankful to Dr. Rajesh Sharma and his entire team for their endless efforts to save our baby,” said Aahana’s father, Dr. Satya Mohapatra who is a Radiologist at a hospital in Bhubaneswar.

5 different Styles of Jeggings under $25