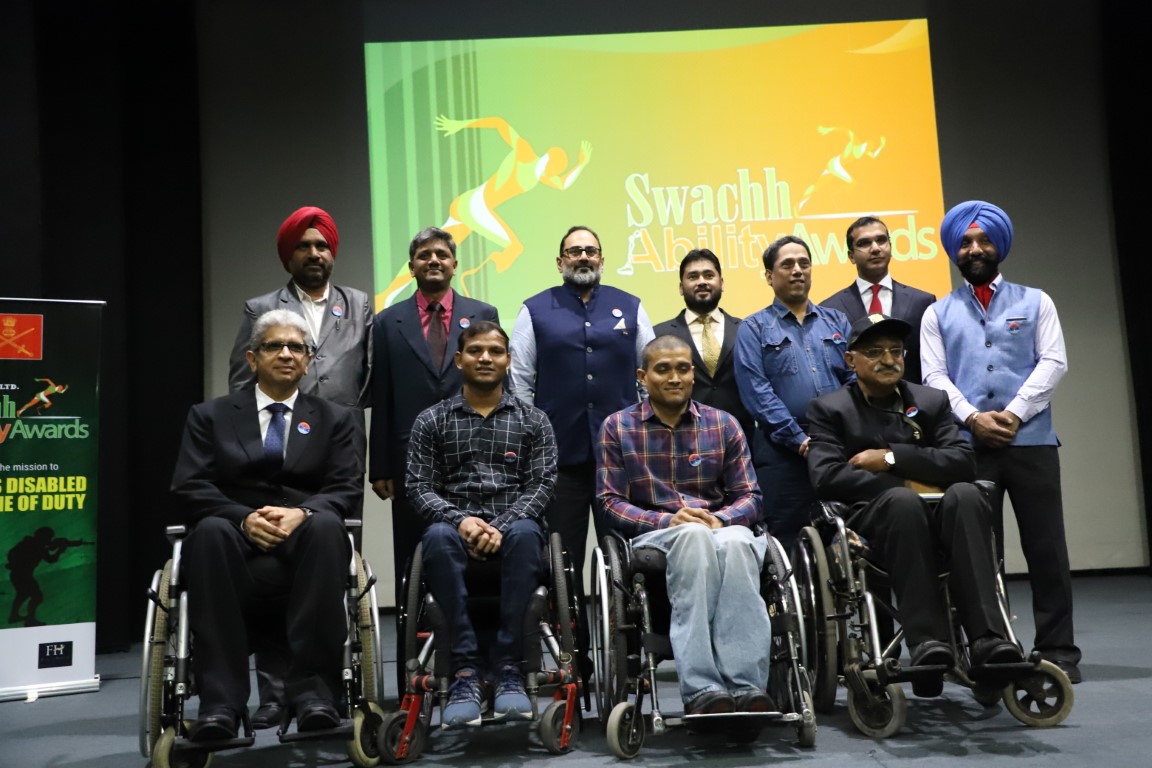 Rajya Sabha Member of Parliament, Rajeev Chandrasekhar graced the event as the Chief Guest. At the ceremony, Chandrasekhar appreciated the collaborated efforts put in by Major DP Singh and JK Cement, aimed at recognizing the specially-abled members of our society, while promoting Prime Minister Narendra Modi’s Swachh Bharat Mission.

The JK Cement SwachhAbility Awards aim to reward the real heroes of India for the contributions they’ve made to the society, despite facing severe setbacks in their own lives. Some of the awardees from this year’s ceremony include Naik Gurmel Singh (Retired from Indian Army), who was injured during Operation Pawan in Sri Lanka and lost his hand. Today, he has risen above his personal disability and is an established businessman who generates employment for 90 families. Samir Zaveri, an amputee, met with a train accident in Mumbai. He is an RTI activist & has helped systematise the railway accident compensation system.

“The JK Cement SwachhAbility Run is a unique platform to spread awareness about the twin causes of Swachh Bharat and integrating specially-abled persons into the mainstream. I thank all the sponsors and partners for their wholehearted support in this mission. We are proud to be associated with this cause and we look forward to taking the initiative to greater heights in the times to come.” Mr. Madhavkrishna Singhania, Special Executive JK Cement Ltd, said.

The journey of army veterans, war heroes and divyangs inspired everyone present. Among others, Major General Sunil Razdan, Guest of Honour, at the ceremony, India’s first paraplegic Major General.

“When I first heard of the concept of the SwachhAbility Run, I knew it was a powerful idea. It was the intersection of three critical, important values that we should all hold very dear. One is the idea of cleanliness, the second was the cause of the divyangs and their indomitable spirit, and the third, the spirit of national service and of putting India first. The run continues to be an embodiment of the values that we as a country must embrace. I wish the team all the luck in taking this run to greater success in the future,” said Member of Parliament, Rajeev Chandrasekhar, at the event.

The JK Cement SwachhAbility Run draws its inspiration from the spirit of selfless service, epitomized by The Indian Army. It is the brainchild of Kargil War veteran and India’s first blade runner, Major D P Singh, and stands in support of two extremely important causes–Prime Minister Narendra Modi’s flagship initiative of Swachha Bharat and inclusion of people with disabilities as equals in the society. Major DP Singh who has participated in over 22 marathons lead from the front and also participated in the run.

The event included two categories of runs – 5km and 3km. 5 km run which is a timed race, is open for all to participate. However, to encourage more participation towards the cause, the 3 km run was done alongside, especially for school children and for anyone else who wished to run a shorter distance.

JK Cement is an organization that cares. It operates on a business model built with sensitivity as one of its cornerstones and an organizational commitment for a better world – for customers, stake-holders, employees and last but not the least, for the community at large.