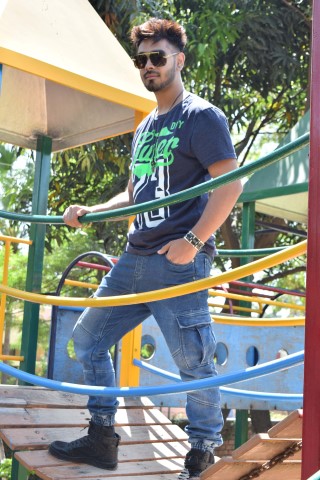 newznew (Chandigarh) : Hit with his previous song ‘Photo’, young Punjabi singer Karan Sehmbhi today reached Chandigarh for promoting his new song ‘Bombshell’. The song was released by T-Series on March 20. Sara Gurpal has acted as model in the song while Preet Hundal has given the music. Aman Grewal has written the song and Jashan Nanadd has prepared the video of the song.  Over one lakhs viewers had seen the video on youtube.

While interaction, Karan said he belongs to Ludhiana and coming to Chandigarh from past six years. He has done his BSc Interior Designing from Chandigarh. He said previously his songs – Photo, Naam and one more album got shortlisted and received enormous amount of love from audiences.

While narrating about his career, Karan said singing has hobby since childhood and by the time entering the intermediate, he participated in many functions in school.  Apart from that, he was one of the finalists at PTC Voice of Punjab – Season 2. “It is very important to reach to our audiences apart from being in online and social media so that you can have the right opinion weather your song become their favourite or not.“ said Sehmbhi