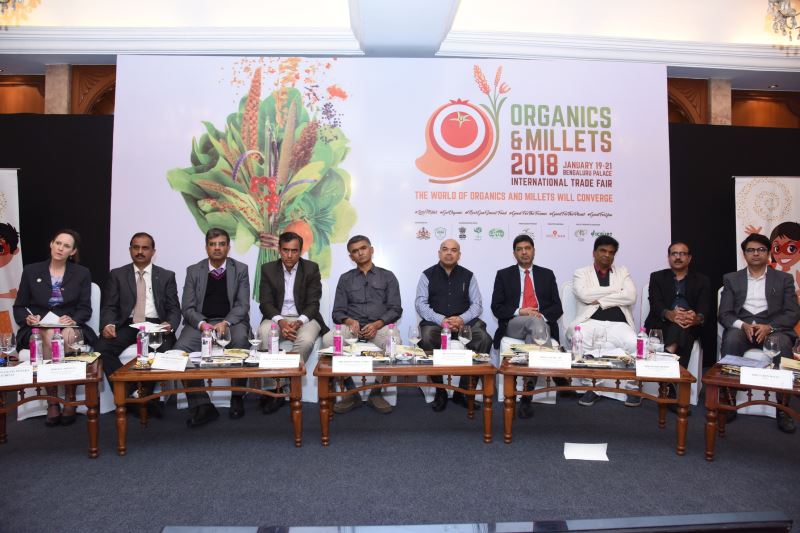 Karnataka is taking its Millet Revolution lock, stock, and barrel to the rest of the country, with the state Minister for Agriculture Krishna Byre Gowda unveiling the new website and logo of the ‘Organics & Millets 2018- International Trade Fair’, scheduled to be held at Palace Grounds, Bengaluru, from January 19 to 21.
Recently, Karnataka Agriculture Minister Mr Krishna Byra Gowda pitched an idea to the United Nations, via the UNFAO through an official visit to Rome, for declaring the year 2018 as ‘International Year of Millets’. The suggestion, if agreed, will raise awareness about millets among consumers, policy makers, industry and R&D sector.
Earlier, Karnataka Department of Agriculture organised roadshows across the country as a precursor to the ‘Organics & Millets 2018- International Trade Fair’ which aims to take the ‘Organic and Millet’ message to the rest of the world.
“Karnataka government’s Organics and Millet call is being answered by farmers across the country. Overlooked since the ‘Green Revolution’ of the 1960s, these forgotten food grains are on the comeback because of their superior nutritional profile and the fact that they are highly drought resistant,” said Agriculture minister Krishna Byra Gowda, while announcing the Organics and Millet International Trade Fair.
Hailed as a miracle crop, the ancient forgotten grain Millets, largely wiped out from our farms and diets, is making a comeback, thanks to the efforts of Karnataka government. The three roadshows in Chennai, Hyderabad and Cochin on October 5th, October 24th and October 27th garnered considerable local and national attention, setting off an intense debate around the country on sustainable farming. The ‘Organics & Millets 2018- International Trade Fair’ will showcase the growing awareness about an alternative lifestyle and farming that respects nature. Nutritionally superior to wheat & rice owing to their higher levels of protein with more balanced amino acid profile, crude fiber & minerals such as Iron, Zinc, and Phosphorous, millets can provide nutritional security and act as a shield against nutritional deficiency, especially among children and women. The anaemia (iron deficiency), B-complex vitamin deficiency, pellagra (niacin deficiency) can be effectively tackled with intake of less expensive but nutritionally rich food grains like millets. Millets can also help tackle health challenges such as obesity, diabetes and lifestyle problems as they are gluten free, have a low glycemic index and are high in dietary fibre and antioxidants.
“This fair is a platform to bring farmers, marketers and consumers under one roof. We are proud to say that Karnataka is the first state to take the ‘Organic and Millet’ message to the world outside. Besides, our venture is the first of its kind initiative in the country to create awareness about the Organics and Millets from the government’s side. For this mission to be succesful, we need the support of our neighbouring states too,” Mr Gowda said.
Also Read :   Mother’s Day celebration held in a unique way