Shri KadakampallySurendran, Minister for Tourism, Government of Kerala received six National Tourism Awards 2015-16 from The President Shri Ram NathKovind, VigyanBhawan in New Delhi today. The Department of Tourism, Government of Kerala has been lauded with Hall of fame award for the ‘Most Innovative Use of Information Technology – Social Media / Mobile App’ for the ninth consecutive year. 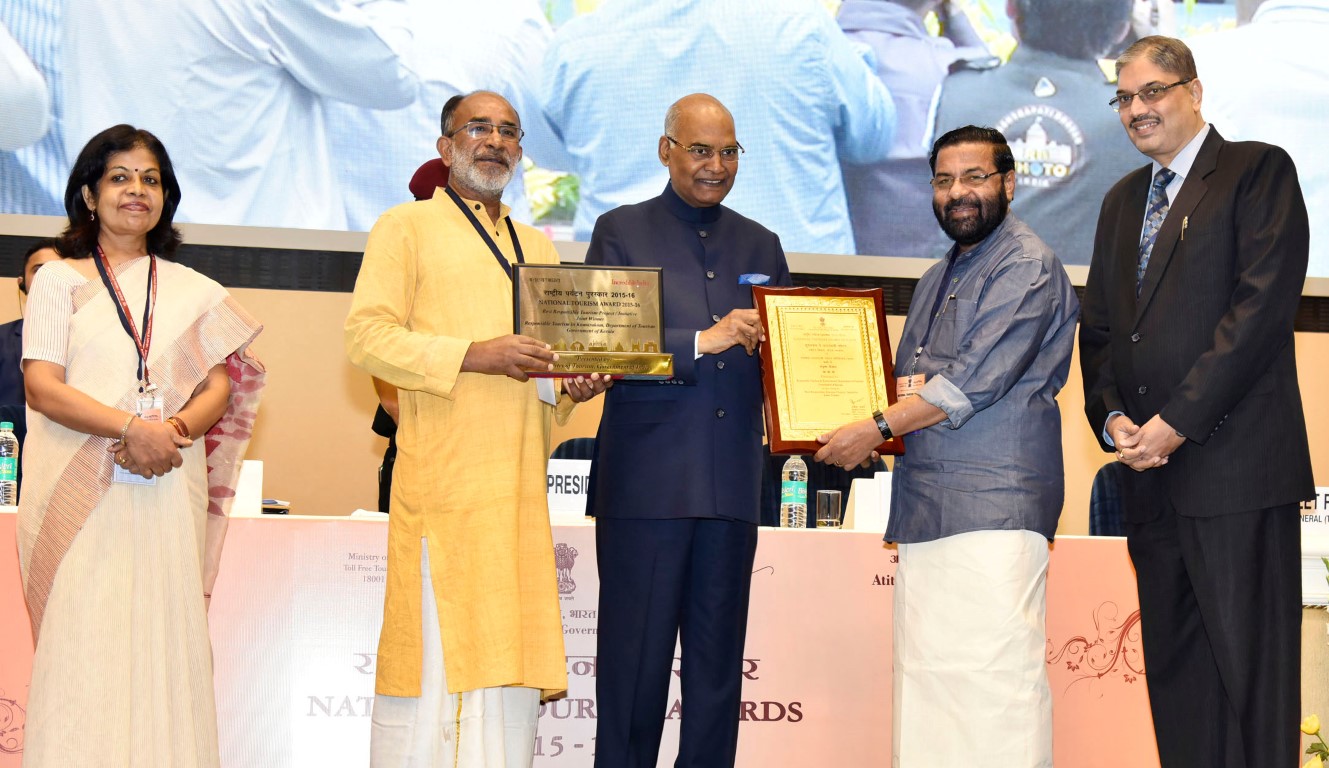 Out of these six awards, Kerala Tourism bagged two awards in the marketing category, including ‘Best Tourism Promotion Publicity Material’ for a film tourism brochure- ‘Your Next Blockbuster Destination’ and ‘Excellence in Publishing in Foreign language other than English’ for a Spanish Brochure titled “Reanimar – Enel PropioPais de Dios”, conceived and developed by Stark Communications. The film tourismbrochure highlights the picturesque beaches, exotic wildlife, hill stations and unexplored backwaters that are amongst just a few of the prime locations that can be used to shoot any form of media. The Spanish brochure encapsulates the key attractions of the state, highlighting why Kerala is considered to be the most sought-after destination across the world.

The state tourism also bagged an award for the Best Responsible Tourism Initiative for ‘Kumarakom’. The spirit of Kerala’s Responsible Tourism is based on the availability of plenty of natural resources, skilled manpower, supportive entrepreneurial community, strong local-self-governments, civil-society organizations, multitude of micro enterprises, streams of professionals and academicians, responsible media and responsive tourism industry. All of these initiatives provide the state an ideal setting to implement andpractice it.

Kerala Tourism has some robust infrastructural development plans to promote ‘Responsible Tourism’ and the state’s tourism department is working thoroughly on formulating and executing development plans for the overall growth of the state.

With the aim to promote river-cruise tourism, the Government of Kerala has envisioned Rs 300-crore project for nine rivers in Kannur and Kasaragod. In addition, the State government is planning to develop quite a few adventure parks for adventure enthusiasts. For which, the government allocated Rs. 45 crore for Prasadam project and Rs. 20 crore for Green Carpet scheme for Alappuzha, Enranjil, Neyyar and Thenmala.

Interestingly, for the ninth consecutive year, Kerala Tourism has been awarded with Hall of fame award for the ‘Most Innovative Use of Information Technology – Social Media / Mobile App’. Being the first tourism board to run an official website, Kerala Tourism has always been in the forefront to utilize the technology in the tourism sector. Moreover, Kerala Tourism has initiated various innovative social media campaigns such as Kerala Blog Express, Visit Kerala and Go Kerala bidwars app.

Kerala Tourism spends around 30% of its budget on branding and marketing. The share of digital media has gone up in the state’s advertising and marketing budget. It accounts for 20 percent of the total in its latest campaign.The state tourism contemplated on the need of improving its social media presence as it becomes easier for the tourism board to create buzz for promoting new destinations.

In June, Kerala Tourism launched a digital campaign #Kerala #IndiaForBeginners with an aim to promote Kerala as the best destination for the tourist’s visiting India for the first time. With the onset of this campaign, Kerala Tourism is targeting 50% growth in domestic as well as international tourist’s arrival by 2021. #IndiaForBeginners campaign has reached over 1,250,954 numbers of people with 6,283,431 impressions. Through the vast reach of social media, the tourism board has reached out to a wider audience, which gave extremely positive response.

The state has been witnessing consistent growth in Foreign Tourist arrivals since 2011. Kerala has hosted 10,38,419 foreign tourists during 2016, with an increase of 6.23 percent.

Kerala Tourism is currently in the process of re-branding itself and following a robust tourism development plan to develop tourist spots across the state as adventure tourism destinations. The objective is to invite vacationers to explore adventure activities like trekking, wildlife safari, mountain climbing, river rafting, paragliding etc. To promote green tourism, the state government plans to develop 10 eco-tourism circuits to connect various forests.

As per the Kerala Tourism survey report of 2016, sixty-five per cent of the population is below 35 years of age and Henceforth, Kerala Tourism aims to position the state as the land of adventure, with a lot of emphasis on water sports. All along its coast lines, it plans to develop water parks and promote water based activities.

The 1981-founded Kerala Tourism, which is headquartered in the state capital Thiruvananthapuram, is a

Governmentorganisation that undertakes policy formulation, implementation of projects and marketingof “God’s Own Country” as a tourist destination.