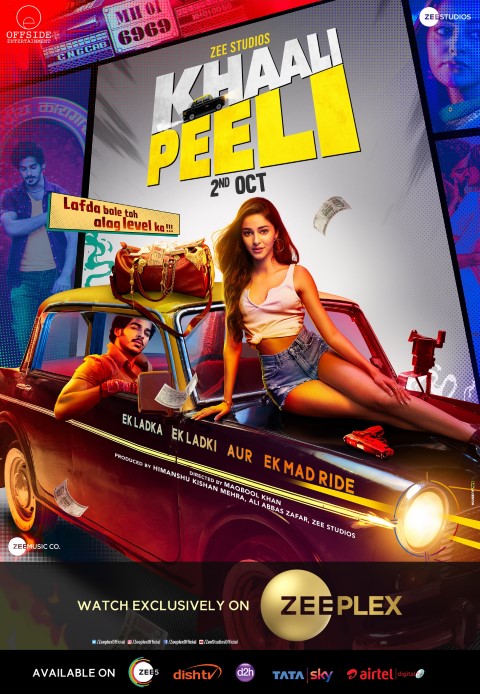 With this new feature, customers will now have the option to watch their preferred new blockbusters in the solace of their homes along with their entire families.

The booking are open for the film Khaali Peeli on Zee Plex which will be available in India from 2nd October as a Pay Per View service across different languages to subscribers of leading distribution platforms like Dish TV, Tata Sky, D2H and Airtel Digital TV as well as key distribution platforms in the international markets.

The service will be available 24×7 and feature shows at various intervals through the day giving consumers the required flexibility. Consumers will also be able to book their movie shows well in advance prior to the release date and watch any new movie release along with their family with a single ticket. Zee Plex as a C2H service, will also be available on ZEE5 (ZEE’s OTT Platform) globally.

Khaali Peeli will be one of the first movies to release on Zee’s new platform – Zee Plex. What’s more, is that the movie will be available in multiple languages so everyone can choose their own preferred language and enjoy it to the fullest.

Khaali Peeli is the story about two childhood sweethearts, Pooja and Blackie, who get separated due to some circumstances, during the young age. But a situation brings them back together, which leads to a series of ‘chase and escape’ situations in a taxi and hence the movie has been titled Khaali Peeli. From action to romance to blockbuster songs and chase sequences, Khaali Peeli has all the right ingredients to entertain the audience.

The movie has been directed by Maqbool Khan and produced by Zee Studios, Ali Abbas Zafar and Himanshu Kishan Mehra. While the story is by Maqbool Khan, the film is written by Yash Kesarwani and Seema Aggarwal.

Ka Pae Ranasingam focuses on the struggle of farmers and how the corporate sector exploits the natural resources. In the film, Vijay Sethupathi and Aishwarya Rajesh’s characters are fighting for farmers and standing up for themselves.

Also Read :   It’s about dreams and how far would you go to realise them says Mukesh Sharma

Airtel Digital TV service subscribers needs to give a missed call on 8800388006 or visit www.airtel.in/dth/zeeplex .

D2H subscribers can now book their show on www.d2h.com or d2h infinity app.

DISH TV subscribers can visit the MY DISH TV APP or www.mydishtv.in .

While subscribers of ZEE5 OTT service can now book their ticket on ZEE5 app.

I left my family business for music : Happy Singh

Oxigen Disrupting the Payment Ecosystem By its Omni-channel presence