~Welcomes Ishant Sharma on board!~

~The franchise also unveiled their team jersey along with key sponsors~

newznew (Indore) : Commencing the tournament, Kings XI Punjab, kick started the tenth edition of Vivo IPL with a press conference at their home ground in Indore.  Unveiling the jersey, Virender Sehwag along with Satish Menon, Chief Executive Officer, Kings XI Punjab and squad players Martin Guptill and Eoin Morgan interacted with the media sharing their expectations for the upcoming tournament.

Accompanying Kings XI Punjab, key sponsors of the franchise, Hero Cycles, Idea Cellular, ItzCash and Arabol Lubricants were also present at the venue. While Hero cycles has come on board as Kings XI Punjab’s Title Sponsor for the series, Idea Cellular, ItzCash and Arabol Lubricants are associated as their Principal Sponsor, Official Principal Sponsor and Official Sponsor respectively.

Satish Menon, Chief Executive Officer, Kings XI Punjab stated, “It’s a fresh start for the team and we are glad to commence with new players and partners on board. We have tremendous faith in Sehwag and his ability to shape the team together. Indore has been very warm to us and we are thrilled to be beginning our season in the city.”

When questioned about his thoughts on the upcoming season Virender Sehwag, Head of Cricket Operations, Kings XI Punjab stated: “I am very excited for IPL 2017. The players are in a great headspace, and the energy around the franchise is very positive. We hope to have some fantastic games ahead and I feel with the talent and chemistry this team is building, it will hold us in a good position for this season. I share a strong bond with Ishant Sharma as he played under my captaincy in the Ranji Trophy and later in the India team, his addition will most definitely strengthen our squad.” 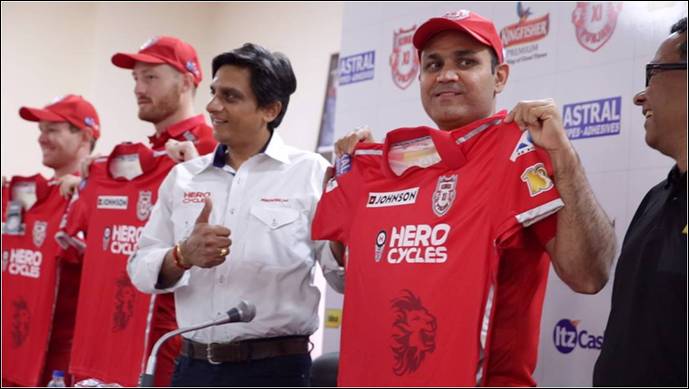 Rohit Sharma, Chief Communications Officer, Hero Cycles, commented “We at Hero Cycles are delighted to be the principal sponsor of the Punjab Kings Xi team. We look forward to make this partnership a successful one by promoting an active lifestyle, sportsmanship and rekindling the joy of cycling! This association is special and will surely bring in lots of smiles and glory to the state of Punjab and its people.“

Speaking about the association, Mr. Sashi Shankar, Chief Marketing Officer, Idea Cellular said, “Brand Idea has always been committed towards promoting sports and sporting events in the country. Continuing with this legacy, this year too, brand Idea is happy to be associated with the promising Punjab Kings XI team. Our association with the Team will result in Idea customers get a host of benefits, and opportunities to engage with their cricketing heroes. Over 3 Crore Idea subscribers in Punjab and MP will directly benefit from this association and the nearly 20 Crore subscribers nationally will get to be part of the T-20 action.

Match day tickets for Kings XI Punjab are on sale now and can be bought at www.bookmyshow.com, www.kxip.in and at the on ground box office at Nehru Stadium, Indore.