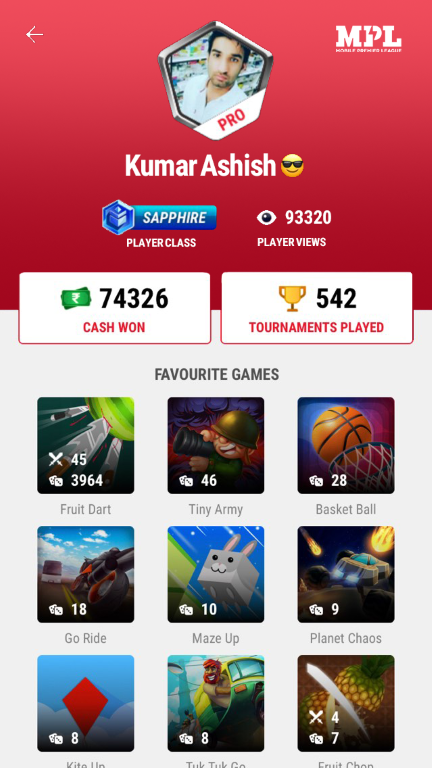 MPL, India’s fastest growing Mobile eSports platform, attracts millions of users from across the country, allowing them to participate in a range of skill based mobile games and compete with over tens of thousands of players in 1v1 or tournament style player formats.

Kumar Ashish has been a regular gamer on MPL since he downloaded the app. He spends a few hours everyday practicing and improving his gaming skills on the platform. Kumar heard of MPL on YouTube and instantly downloaded it.

The quality of games, access to millions of players like himself and opportunities for reward were factors that attracted him the most.  According to Kumar, it was easy to download the app and start playing, but he only realized the full potential of mobile gaming once he started winning real money on MPL.

While competing and winning is exhilarating, he makes sure to enjoy the games, especially fruit dart. ” I have played over 500 tournaments and my favourite game on MPL is fruit dart. I was able to reach the sapphire class in a short span of time because of regular practice and my urge to win”.

Till now, Kumar has got almost one lakh views on his MPL profile and frequently shares his winning tips and tricks with other players in the chat section of the app. In addition to the cash rewards, he has also won an LED TV by winning one of the latest tournaments on the app. Kumar is already an MPL hero in a lot of ways.

He adds “I am not just a hero in the virtual world, but one at home too! My parents were extremely proud of me when they got to know that I have won cash prize by playing games on MPL and focusing on my studies at the same time.

I was able to contribute towards my family expenses and sibling’s education with the help of money won. MPL is not just another app, it has given many gamers like me the right path to sharpen our skills and win rewards.  Patience and regular practice has helped me achieve this feat and I aim to improve my skills every day.” he added.

Kumar is currently pursuing bachelors in pharmacy and aspires to become a drug inspector in the future. Along with his career, Kumar is keen on pursuing mobile gaming as a passion.

India is still adapting to the new shift with respect to gaming. Mobile Gaming has been gaining momentum in the Indian market with the proliferation of mobile phones and affordable data plans. India is now one of the top five markets for mobile gaming in terms of the number of users with Indians from across age groups adopting the sport.

MPL aims to break barriers of age, skill levels and region by making mobile gaming more accessible to Indians across the country. Users can download the app on mpl.live or the Google Play store and App store.

MPL (Mobile Premier League) is a holistic mobile gaming application, launched in September 2018. In the short span of time since it went live, the platform has garnered over millions of users, making it India’s fastest growing eSports Platform.

MPL offers mobile gaming lovers, a one-stop-platform with multiple, popular, skill-based games to choose from. With its low entry-barrier and selection of multiple casual games, MPL ensures that even inexperienced and new users have the opportunity to compete and win rewards and participate in the many tournaments that the platform hosts. Users can download the app via the Google Play store, App store and MPL website.