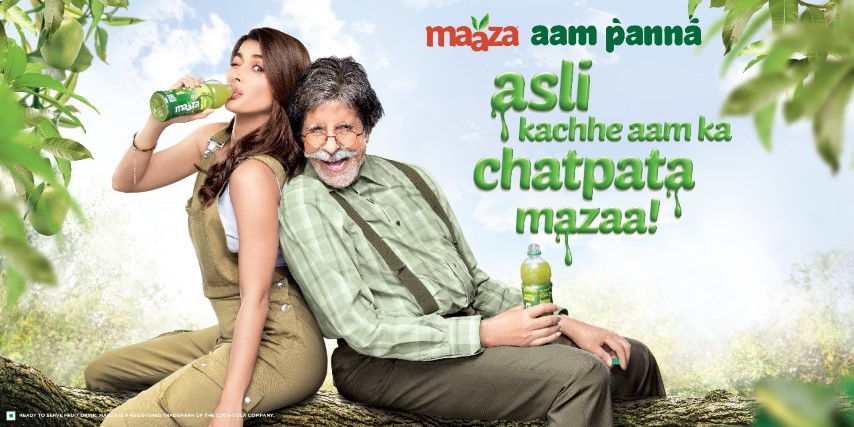 Further expanding the homegrown beverage brand’s portfolio, the Company aims to refresh its consumers this summer with a new beverage, most suited to the Indian palettes, made with real green mangoes and delicious Indian masalas.

With the launch of this new flavour and as an extension to the brand’s recent campaign ‘Dildaar Bana De’, Maaza also unveiled a new TVC for Aam Panna with legendary veteran actor Amitabh Bachchan, along with renowned actress and model Pooja Hegde.

Conceptualized by McCann World Group, this campaign is a continuum of the brand’s philosophy of ‘Dildaari’, and beautifully depicts the values of kindness and generosity. The brand has adopted a 360-degree marketing approach to amplify the new campaign, consisting of TV and digital broadcasting.

Announcing the launch of the new variant and its campaign, Ajay Konale, Director Marketing, Nutrition Category, Coca-Cola India and Southwest Asia said, “Maaza our heritage brand has indulged Indian consumers in the authentic pleasure of delicious real mangoes. Currently, Maaza is one of the leading brands in the overall beverage category for Coca-Cola India. This new variant of Maaza, Aam Panna, is uniquely Indian too. It offers an unparalleled taste of authentic raw green mangoes, made tastier with delicious Indian spices. With the launch of Maaza’s new ‘Aam Panna’ variant, the Coca-Cola Company aims to further strengthen its commitment to Indian farmers, while also boosting the demand by five times for homegrown raw mangoes.

We are humbled to have Mr. Bachchan and Ms. Hegde onboard with us, once again, for our new campaign.”

Continuing to be the country’s beloved mango drink, Maaza’s contributions towards enhancing the socio-economic development of Indian farmers, is further strengthened, with robust plans on amping up the new Aam Panna variant. In 2023-24, it will propel the procurement of raw mangoes by 20 times in addition to the existing demand for ripe mango varieties. This will further lead to Coca-Cola becoming one of the largest procurers of mangoes in India. It reinforces the Company’s vision of supporting farmer livelihoods and incomes, through its sustainable agriculture initiative – ‘Fruit Circular Economy’. Initiated in 2011 with ‘Project Unnati Mango’ in Andhra Pradesh, the program encourages reduced input costs for farmers, enhanced productivity, local procurement of agricultural products, increasing export demand for locally produced fruits, and supporting farmer livelihoods while reducing wastage across the value chain.

Sambit Mohanty, Creative Head, McCann Worldgroup, said “Made from raw mango pulp, tasty & tangy Maaza Aam Panna is the quintessential summer cooler. Our film very simply depicts a transition from disappointment to delight at getting to taste a drink that’s as thrilling as raw mangoes.”

Pooja Hegde, Indian actress & star of the new Maaza campaign, said, “Traditionally, Aam Panna has been India’s most beloved summer beverage. I am excited to collaborate with Maaza once again, to bring this summer-favorite drink to consumers. Furthermore, getting another opportunity to co-star with my idol and inspiration – Mr. Bachchan, has been the most amazing opportunity. As the heat sets-in in most parts of the country, I can think of no better beverage to quench the thirst of millions of Indians, than the refreshing Maaza Aam Panna.”

The new variant will be available on shelves across North, West, and East regions of India, and will be retailed across more than five lakh stores across the country.

For decades, Maaza has refreshed its consumers in by offering the ultimate mango experience. The legacy brand has played a core role in all moments of celebration, festivities, and happiness of its consumers, across the country throughout the year. This summer, Maaza brings to consumers a new recipe to refresh and rejuvenate them in mind, body, and spirit.