newznew (New Zealand) : There are difficult times ahead for immigrants and students if the Labour Party wins this year’s election in New Zealand.

Leader of the opposition’s Labour Party, Andrew Little, yesterday announced his party’s new immigration policy that will tighten student and work visas rules and cut net migration by 20,000 – 30,000 a year. 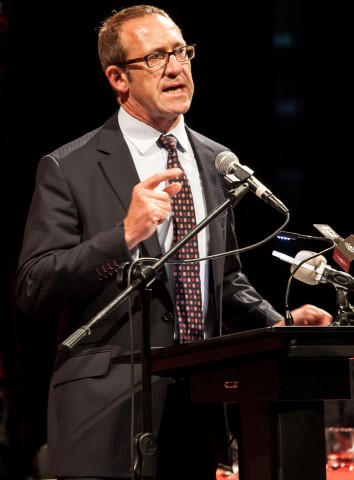 Andrew Little said his party would clamp down on “sham” low-level courses, run mainly by Private Training Establishments, which are being used as a back door to gain residency by international students.

Since 2013, immigration has increased more than four times than what was forecast.

International students, including those from India, doing any course below university-level bachelor degree and who want to work and stay in New Zealand after their study, will now be most affected.

Students will also be permitted to take up employment while studying. Presently, overseas students can legally work part time for 20 hours while studying and full-time during course vacations.

Students are now allowed to stay for a year after finishing their study on an open visa, and later on a two-year work visa if they secure a course-related job. These extra three years of onshore study and work experience gave them more points to apply for residency.

The party will remove the post-study open work visa unless they have a job offer.

There will also be no bonus points to those who studied or worked in New Zealand and points for age would be standardised to 30 for everyone under age of 45.

Labour Party will also introduce a stricter labour market test to ensure employers do not recruit from overseas unless they cannot find a suitable local resident. There are over 90,000 local young Kiwis who are now unemployed.

The New Zealand PM, Bill English has criticised it as “it (will) stall the economy”.

Some Kiwis also appear to support this move as they blame migrants for current housing shortage in Auckland (most migrants chose to settle there) and the perception that migrants take away their jobs.

Some business groups are also questioning it as this may affect the hospitality, education and tourism industry and vacancies will be hard to fill.

The present government in April raised the income threshold to $49,000 for applying for a residency that will now result in many skilled workers ineligible to apply for residency.

If Labour Party wins and implements this policy, it is feared that it will result in closure of at least 70% of New Zealand’s educational institutes that are dependent upon international students – mainly from India and China.

No government can afford to lose a flourishing industry that generates $4.5 billion in foreign exchange revenue.

There is going to be a long, anxious wait for international students and prospective migrants until elections are held in September and results are known.

Britney Spears On The Stage Of Best Time Ever Video Details

CM Badal & Harsimrat Badal calls upon people to follow the...