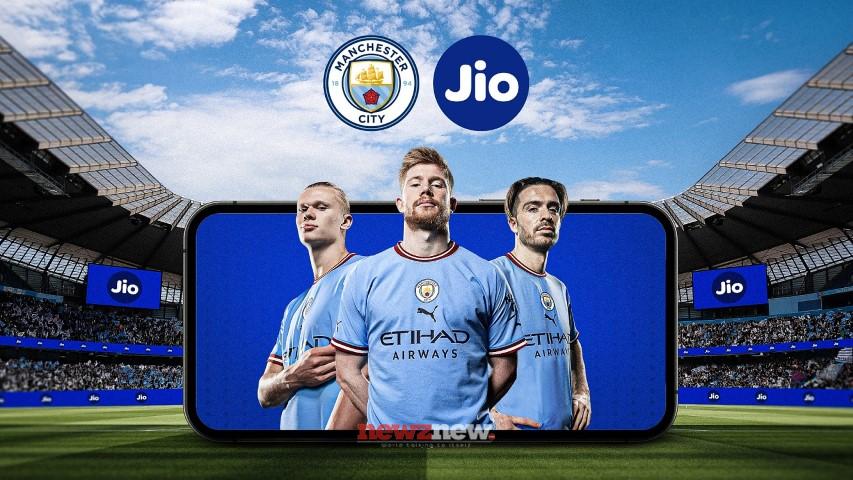 The partnership was enabled and supported by RISE Worldwide, a Reliance initiative, India’s largest sports and entertainment company.

Through this partnership, Man City and Jio will collaborate on a variety of engaging experiences that fans will be able to access through Jio’s digital ecosystem comprising JioTV, MyJio, Jio STB, JioEngage and other applications and platforms, in addition to exclusive giveaways and in-market activities.

In addition to the Jio brand featuring across the club’s in-stadia and digital assets, as part of the new deal Jio’s associate brands, RISE and Viacom18 will also leverage several partnership rights across their football and sports offerings.

Akash Ambani, Chairman of Reliance Jio Infocomm Limited (a wholly-owned subsidiary of Jio Platforms Limited), said: “We are excited to announce Jio’s exclusive partnership with Manchester City in India through which we will present City fans with experiences through a multitude of digitally powered immersive initiatives. We believe both brands share similar values of bringing transformational impact to their communities and through this partnership, we endeavour to bring the best of football to the sports communities and Man City fans in India.”

Ferran Soriano, Chief Executive Officer, City Football Group, said: “We’re pleased to welcome Jio as an Official Partner of Manchester City today. The Club has a passionate and growing fanbase in India and we are continually exploring new ways to provide greater fan experiences for our followers in the region and around the globe, particularly within the digital and technology space. We look forward to working with Jio as we develop these opportunities throughout the partnership.”

Under manager Pep Guardiola, one of the most highly decorated managers in world football, the Club plays its domestic and UEFA Champions League home fixtures at the Etihad Stadium, a spectacular 55,000 seat arena that City have called home since 2003. Today, the Stadium sits on the wider Etihad Campus, which also encompasses the City Football Academy, a state-of-the-art performance training and youth development facility located in the heart of East Manchester. Featuring a 7,000 capacity Academy Stadium, the City Football Academy is also where Manchester City Women’s Football Club and the Elite Development Squad train on a daily basis and play their competitive home games.

Jio Platforms Limited (“Jio”), a subsidiary of Reliance Industries Limited, has built a world-class all-IP data strong future proof network with latest 4G LTE technology (through its wholly owned subsidiary, Reliance Jio Infocomm Limited). The network is 5G ready with no legacy infrastructure and indigenous 5G stack. It is the only network conceived as a Mobile Video Network from the ground up. It is future ready and can be easily upgraded to support even more data, as technologies advance on to 6G and beyond.

Jio has brought transformational changes in the Indian digital services space to enable the vision of Digital India for 1.3 billion Indians and propel India into global leadership in the digital economy. It has created an eco-system comprising of network, devices, applications and content, platforms, service experience and affordable tariffs for everyone to live the Jio Digital Life.

As part of its customer offers, Jio has revolutionised the Indian telecom landscape by making voice calls for Jio customers absolutely free, across India, to any network, and always.

A Mega Blood Donation Camp On The Occasion Of Aggarsen Jayanti...