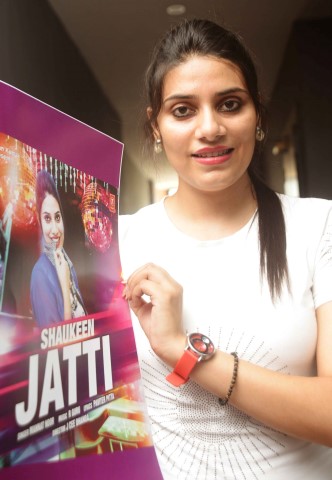 NewZNew (Chandigarh) : Mannat Noor, a famous Punjabi singer who had created waves with her song Saari Raat Gidde Vich Nachna today launched video song by the name of Shaukeen Jatti under the banner of T Series.

The video was launched at Sur Sangam Studio in Sector 22 and was attended by Jarnail Ghuman, Managing Director Sur Sangam Studio who is also a lyricist. Ravinder Singh flutist and Gurjit Singh Billa were also present.

Mannat Noor informed Shaukeen Jatti has been directed by J.C. Dhanoa and Music has been given by R. Guru and Producer and Lyrics is Pavitar Pitta. She said her earlier song Saari Raat Gidde Vich Nachna had got a lot of popularity adding she has taken care there is no vulgarity in the video.

She informed Pavitar Pitta had supported the project a lot. She added she had sung a lot of songs in Punjabi movies which have won her accolades.

Here is the Video :