NewZNew (Chandigarh) : Chandigarh Chapter of the Company of Master Mariners of India  (CMM) celebrated the Day of the Seafarer designated by the International Maritime Organisation (IMO) worldwide, at Chandigarh Golf Club. 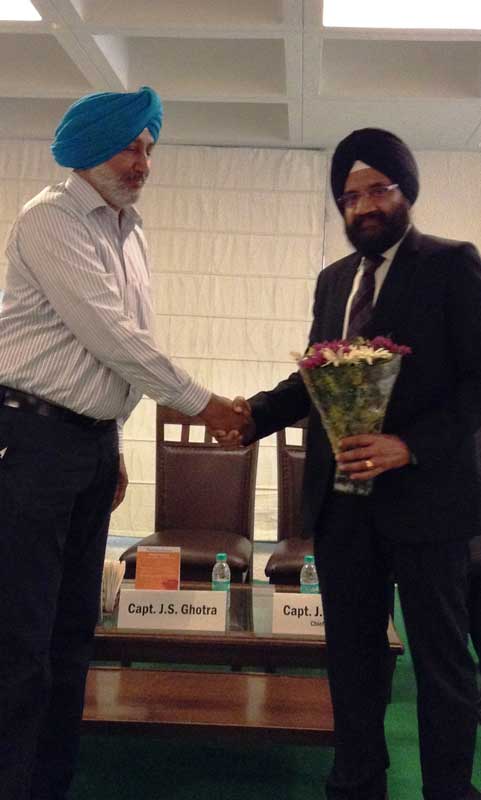 Capt. J.S. Uppal, Principal Officer of the Mercantile Marine Department of Director-General of Shipping, Government of India, from Mumbai, said that seafarers serve at sea not just for the shipping industry or for their own career but they touch the lives of people everywhere around the globe for their necessities and luxuries of life, making the shipping industry indispensable to the world.

June 25th has been designated by United Nations as the Day of the Seafarer, he explained, to show our appreciation for the seafarers that quietly, and largely unnoticed, keep the wheels of the world in motion, and is being promoted worldwide on social media using the key hashtag, #AtSeaForAll.

Capt Uppal referring to a study said that there is going to be a shortfall of 1.5 lakh mariners by 2025, opening up newer career opportunity in merchant navy field.

He said that all records and the process of certification of mariners is being digitised and in two years time, neither the students nor the officers would have to visit the office of the Mercantile and Marine Department in Mumbai for their certification.

He also pointed out that the unscrupulous institutes in delivering marine courses would also be weeded out through centralised online certification process of officers which would help us retain our country’s image of producing the best naval officers in the world.

Capt N.P. Passey, Chairman, Foreign Owners and Ship Managers Association (FOSMA), Mumbai, who was the guest of honour,  highlighted the value of seafairing and alternative career opportunities open to them in addition to sailing at sea.

Capt Passey applauded the mariners for having had no strike ever in the industry, and he promised, that as representative of foreign ship owners and managers, he would continue to keep the interest and growth of the mariners uppermost in mind.

Mr. A.S. Thakur, CEO, Maritime Union of India, Mumbai, a union of the Indian officers of merchant navy, spoke about the new initiatives being undertaken by MUI to improve the lives of seafarers.

Capt Mahesh Yadav, Director, FOSMA, informed about various courses being devised on the Standard of Training for Certification and Watchkeeping for Seafarers (STCW), while Arjun Singh highlighted the technical innovations that have taken place in the industry.

Capt. M.S. Kahlon, Event Chairman celebration informed that the Chapter has been taking up several initiatives to educate youngsters about newer career opportunities in merchant navy.

Both FOSMA and MUI complimented the efforts of CMMI Chandigarh Chapter and presented them the cheques as a mark of appreciation.

Tricity is home to an estimated 3,500 seafaring officers and engineers who remit nearly Rs.35 crore in foreign exchange to this region every month, Capt Kahlon informed.

Established in 1957 at Mumbai, CMMI has 15 Chapters all over India, and the formation of Chandigarh Chapter which coincides with the National Maritime Week celebrations, which commemorates the voyage of the first Indian flagship, “S.S.Loyalty” from Mumbai to London on 5th April 1919.