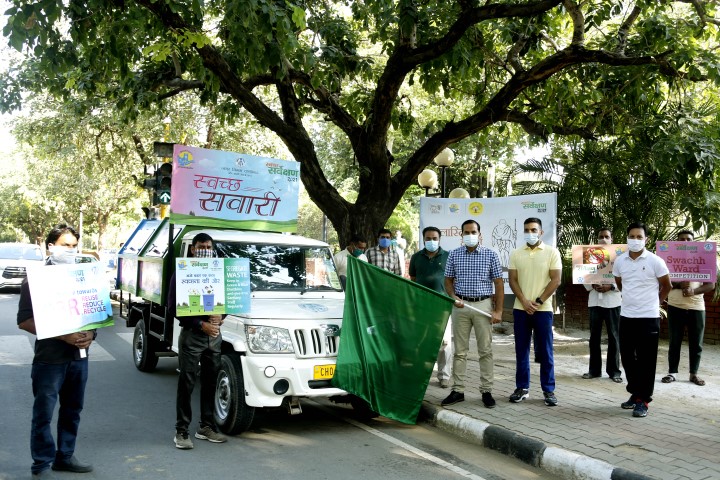 While explaining about the awareness and contest, the Commissioner informed that in view of  Swachhta Ranking and Swachh Survekshan-2021 , Municipal Corporation Chandigarh has launched “Swachh Swaari“ (An Initiative towards 3R Reduce, Reuse ,Recycle Principle)  under which Citizens can Contribute Clothes, Shoes, Stationery , Books, in this Swachh Sawari. He said that the ‘Swachh Sawari’ will move Sector wise for the ease of Citizens and the schedule of Swachh Sawari  will be shared with Citizens.

The Commissioner said that a “Swachh Ward” Competition, an Inter-Ward Competition has also been launched today covering some major indicators like: Segregation, Citizen Engagement, 3R principle. He said that an independent committee will be accessing these parameters   and results of Wardwise Ranking will be declared on Monthly basis till January -2021.

The Commissioner said that the MCC has appointed Ward wise Nodal Officers for ease of Citizen approach for timely resolution of grievances. He appealed the citizens of Chandigarh to participate in this contest and motivate others for making Chandigarh “ Swachh and Swasth”.

He further briefed that detailed list of Indicators along with marks, Nodal officers Wardwise and schedule of Swachh Sawari   will be available on MC Website i.e www.mcchandigarh.gov.in  .

Besides launching the Swachh Sawari, the MCC organises intensive cleanliness drives throughout city along with various NGOs and organizations to mark “Gandhi Jayanti”.

Sh. Sourabh Arora, Joint Commissioner, Dr. Amrit Waring, MOH and other officers and officials of MCC were present during the occasion.

Cab service for the wheelchair bound introduced at Fortis Hospital