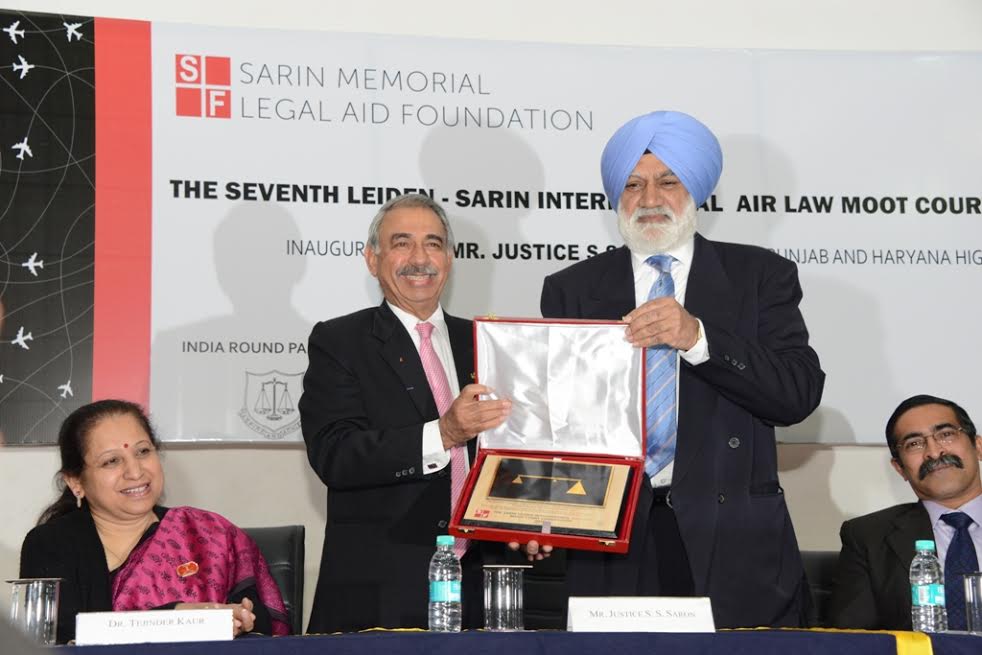 Mr. Justice Saron commended Sarin Memorial Legal Aid Foundation for continuing to provide an excellent platform to the law students of India to compete with the best and get exposure to international legal scenario through participation in the moot court competition.

Senior Advocate Manmohan Lal Sarin of Panjab and Haryana High Court, informed that this year the Sarin Memorial Legal Aid Foundation and International Institute of Air and Space Law of Leiden University in the Netherlands have joined forces with the Masyarakat Hukum Udara (Indonesian Air Law Society), with the purpose of organizing the international air law moot court competition.

In the Indian National round,  teams from some of the 18 leading law schools participated out of which the four winners qualified for participation in the finals of Leiden-Sarin International Air Law Moot Court competition to be held at Jakarta, Indonesia on 7-10 April 2016.

Teams from 20 other countries would vie for the final competition in Indonesia, giving life-time opportunity to students of law to network with some of the best students and faculty specializing in international and air space laws.

The case in the moot court related to shooting down of Malaysian airline i.e. use of force against a civil aircraft in disputed airspace.

Nitin Sarin, the Moot Co-ordinator informed everyone that the success of the first Moot Court held in Delhi in March 2010, led to the invitation by the Dubai Civil Aviation Authority in hosting the 2011 event, which then saw the event take place in the historical corridors of the Istanbul University, Istanbul, Turkey in 2012, Abu Dhabi, UAE in 2013, Bucharest, Romania in 2014, Beijing, China in 2015 while this years Competition will be held in Jakarta, Indonesia. The Leiden-Sarin International Air Law Moot Court is a pioneering event founded by the Sarin Memorial Legal Aid Foundation and Leiden University, the Netherlands. It is the only moot court competition in the world on air law, a fascinating and growing field of law.

PTU all set to begin course in vedic mathematics