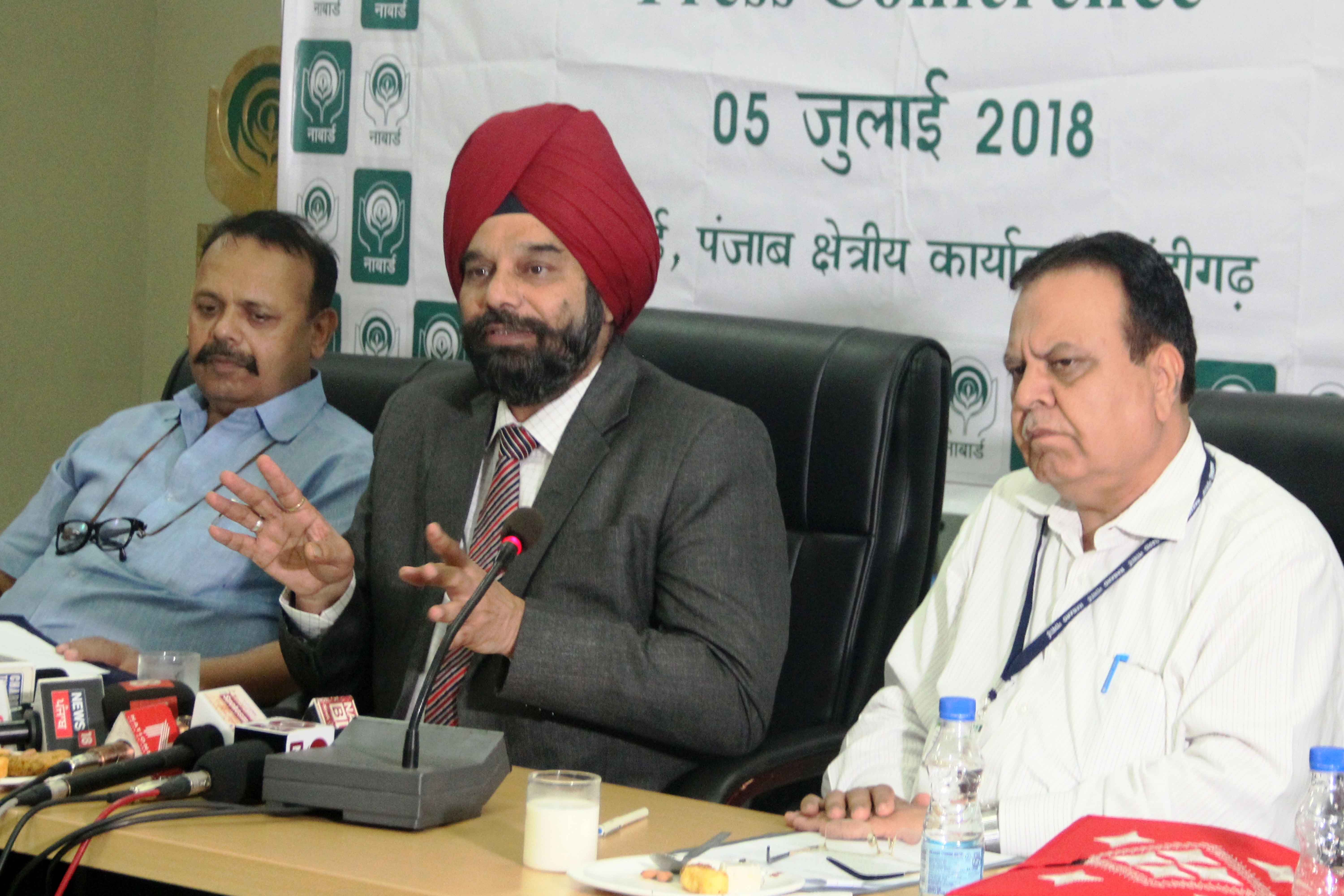 To boost capital formation in agriculture, NABARD provided refinance of Rs. 2249.67 crore to various banks during 2017-18 which shall be increased to Rs. 2900 crore in the current year. NABARD also proposes to increase the support under short term Refinance during the current year which was  Rs 5258.26 crore during previous year for facilitating disbursement of crop loans at concessional interest rate to the farmers by banks. To encourage diversification of crops, NABARD has prepared Area Development Plans of Rs. 1918 crore for 2018-19 to promote dairy, vegetable cultivation, apiculture, mushroom growing which will supplement farmers’income.

Bindra informed that during current year, assistance of Rs. 213.09 crore has already been sanctioned under RIDF to the State Govt. for constructing 71 roads, Rs. 206.06 crore to PSWC under Warehouse Infrastructure Fund for creation of storage capacity and  Rs. 254.40 crore to four Milk producers Union Ltd. in 4 districts (Jalandhar, Ludhiana, Patiala and Ropar) putting the total sanctions to Rs. 673.55 crore.

NABCONS, wholly owned subsidiary of NABARD has recently been engaged by the State Agriculture Marketing Board, Chandigarh for implementing the Project of promoting 2nd Grain, Fruit & Vegetable Market, at Sector 39(West), Chandigarh, by providing consultancy service for preparation of DPR and providing Project Management Consultancy.

Bindra indicated that Paddy Straw burning is a big issue in Punjab which results not only in emission of harmful gases like methane, CO2 and N2O, but also affects agriculture productivity adversely besides also affecting human and livestocks.  The demonstration effect is likely to increase the coverage to more than 10000 acres during the next harvest season.

NABARD has also taken various developmental initiatives in the State. The main issue being faced by the State is to check Paddy straw burning.  A beginning was made last year by NABARD and 1900 farmers covering about 4600 acres spanning over 7 districts have been sensitized of various methods on crop residue management. This year we are going to launch a massive campaign on paddy straw management  in around 3000 villages covering 3.0 lakh ha in the State during kharif 2018. NABARD has also sanctioned a project to Department of Agriculture (DoA) and Punjab State Council for Science & Technology (PSCST) under National Adaptation Fund on Climate Change (NAFCC) for Rs. 48.78 crores for crop residue management and crop diversification, under which we shall be covering all the districts from Kharif 2018 in a phased manner.

Bindra informed that NABARD will continue providing support for financial literacy and strengthening the banking information technology. During the year it has been planned to sanction one mobile demo van per district for spreading financial literacy. Support shall be extended to Commercial banks and RRBs for setting up of Aadhaar enrolment and update centres. Further, Cooperatives are being incentivized to on-board the Public Financial Management System (PFMS) portal which shall facilitate DBT and easy monitoring of subsidy distribution at ground level.  Financial literacy is an important tool for creating demand for financial products. Considering this, it has now been decided to adopt a structured policy for imparting financial literacy to different target segments of population. Sh. Bindra informed that during this year Separate Financial Literacy Awareness Programmes will  be conducted through commercial banks Cooperative banks & RRBs for different target groups, viz. people newly inducted in the financial system, adults, Farmers, School Children, Senior Citizens, SHGs and Entrepreneurs, etc. Further special Programmes on digital financial literacy covering transactions on ATM, Internet Banking, Mobile Banking, Mobile Wallets, *99#, (Unified Payment Interface) UPI/(Bharat Interface for Money) BHIM-UPI, Usage of Debit Cards, and safety measures to be adopted while doing e-transactions.

To address the issue of input supply, crop productivity and marketing, NABARD has so far promoted 91 FPOs in 19 districts across the State which are at different stages of development. These FPOs have brought visible change in collectivising the operations of farming of small and marginal farmers. NABARD has also digitized these FPOs which will help them in credit linkage. NABARD will assist eligible FPOs to get credit from banks as also through NABKISAN Finance Ltd, subsidiary of NABARD, the main objective of which is to provide credit for promotion, expansion and commercialization of enterprises engaged in agriculture, allied and rural non-farm activities.

Last year we had launched Water Campaign 2017 (JalJeevanHai)  in 5000 villages of the State. To take this further, an Integrated Water Management Scheme (IWMS) has been formulated by NABARD to be implemented in two districts namely Ferozpur and Moga, which are identified as Aspirational Districts by GoI where a cluster of 5 villages with an area of about 500 ha in each district will be covered to undertake various soil and water conservation measures, convergence of other schemes and funds.

NABARD has also been promoting rural artisans, weaver and entrepreneurs engaged in non farm activities. Various skill development initiatives are being done through RSETI/RUDSETI & NGOs etc. To support marketing of their products artisans /SHGs are being supported for participation in melas across states and through rural mart and rural haat, This year we propose to open 4 more rural marts and one rural haat in the state. To support cluster development, NABARD shall be taking up Phulkari cluster in Sangrur district and will also identify a new cluster for development. NABSAMRUDDHI Finance Limited, a subsidiary of NABARD, has also been  providing credit facilities to individuals and legal entities for promotion, expansion, commercialization and modernization of enterprises and individuals engaged in non-farm activities including microfinance, MSME, housing, education, transport, etc.

NABARD facilitated saving linkage of 3176 SHGs and credit linkage of 2151 SHGs during the year 2017-18.  Also promoted and financially supported 7205 JLGs through banks in 2017-18 taking cumulative number to 31210.  During the present FY, NABARD envisages to facilitate credit linkage of 5000 SHGs and also financing of 12000 JLGs.

CGM informed that e-Shakti project to capture real time data of the SHGs has been launched in Patiala district during last year. As on date 1120 SHGs have been digitalized so that they can avail timely and hassle free credit from banks. During current year, NABARD will cover more districts under the project during the year so that all the districts of the State can be brought under e-Shakti project  in a phased manner.

HF Super slashes rates of its breads on customer demand