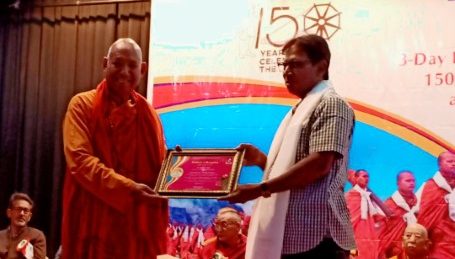 Mr Yadav is General Secretary of the Chandigarh Chapter of Save the Himalayas Foundation and has been active in the media for the past 30 years.

In his address, Bhikkhu Sanghasena said, “The protection of the Himalayan environment is important not only for its inhabitants, but for the whole world, because there is only one Himalaya in the whole world. Narvijay Yadav has made a significant contribution as the General Secretary of the Chandigarh Chapter of the Save the Himalayas Foundation, for which we are grateful to him.”

Apart from the preservation of the Himalayan environment and cultural heritage, the 3-day International Conference also focused on World Peace and the 150th birth anniversary of Mahatma Gandhi.

The significance of the conference increased further as the 200 Buddhist monks from Thailand also joined the meeting, who were part of the month-long Pad Yatra from Dharamsala to Leh. The annual pad yatra is organized to spread the message of world peace.