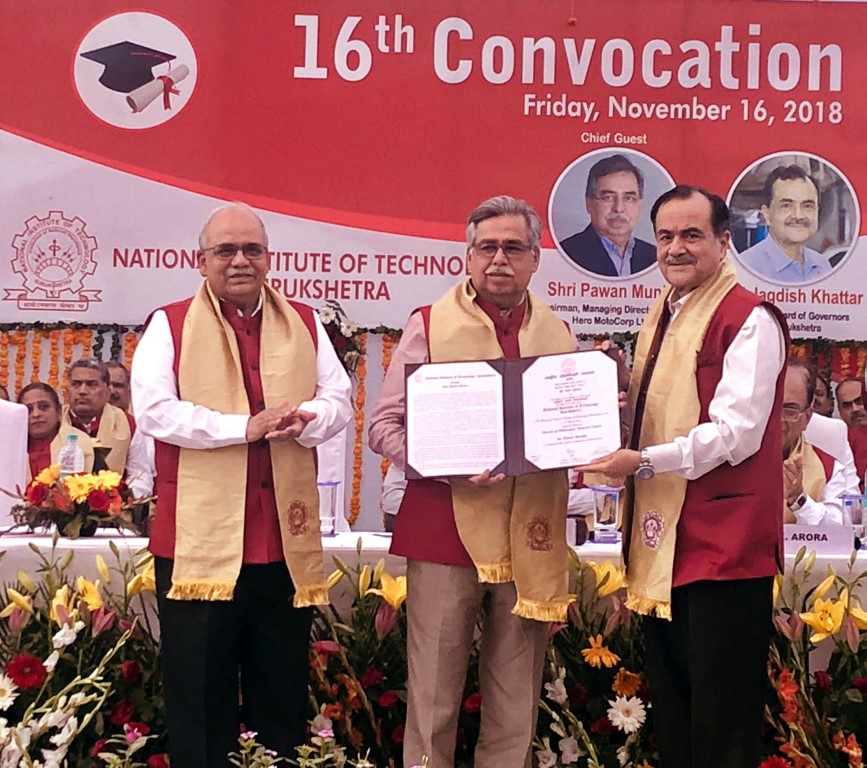 NIT, Kurukshetra’s chairperson of the Board of Governors, Jagdish Khattar and its director, Dr. Satish Kumar presented the degree to Munjal.

NIT, Kurukshetra is Munjal’s alma mater from where he graduated with a degree in Mechanical Engineering in 1976.

Speaking during occasion, Munjal said that the real world outside this campus is going to be very demanding and challenging. You will therefore need to be prepared, mentally and physically – to face the challenges and hold your own. Don’t just be managers and try to manage and maintain the status quo, but be the agents of change and disruption.

He also urged institutes of higher educations in the country to “encourage the students to spend more time on live projects, learn about the new global developments and trends in technology and innovations that are transforming the world today. While our students learn the basics, let us provide them with the resources in order to enable them to take risks and operate in an environment that does not limit their true potential.

Munjal was also the Chief Guest of the convocation ceremony and visited the campus and its facilities. He later interacted separately with the students.

Meanwhile Hero MotoCorp Ltd., has been the world’s largest two-wheeler manufacturer for the past 17 years. Since its inception in 1984, it has sold over 85 million two-wheelers in cumulative sales. The Company has also rapidly expanded its global footprint to 37 countries across the globe. It is one of the largest corporate promoters of sports across the world.

Established in 1963, NIT Kurukshetra was accredited with the status of ‘Institute of National Importance’ in 2008. It is one of the 30 National Institutes of Technology established and administered by Government of India.

Earlier during the year, Mr. Munjal was also awarded with an honorary ‘Doctor of Science’ by Shri Mata Vaishno Devi University, Katra, in recognition of his “invaluable contributions to the nation and strong commitment towards socio-economic development of the country.”