The Ahmadiyya Community is hosting a hospital history exhibition in Qadian; to hold free medical and blood donation camps across Punjab

Ahmadiyya Muslim Community today announced special events to mark the centenary celebrations of the historic Noor Hospital in Qadian, Punjab. The hospital which was established in 1917 to cater to the needs of local residents, is well known for having served humanity. 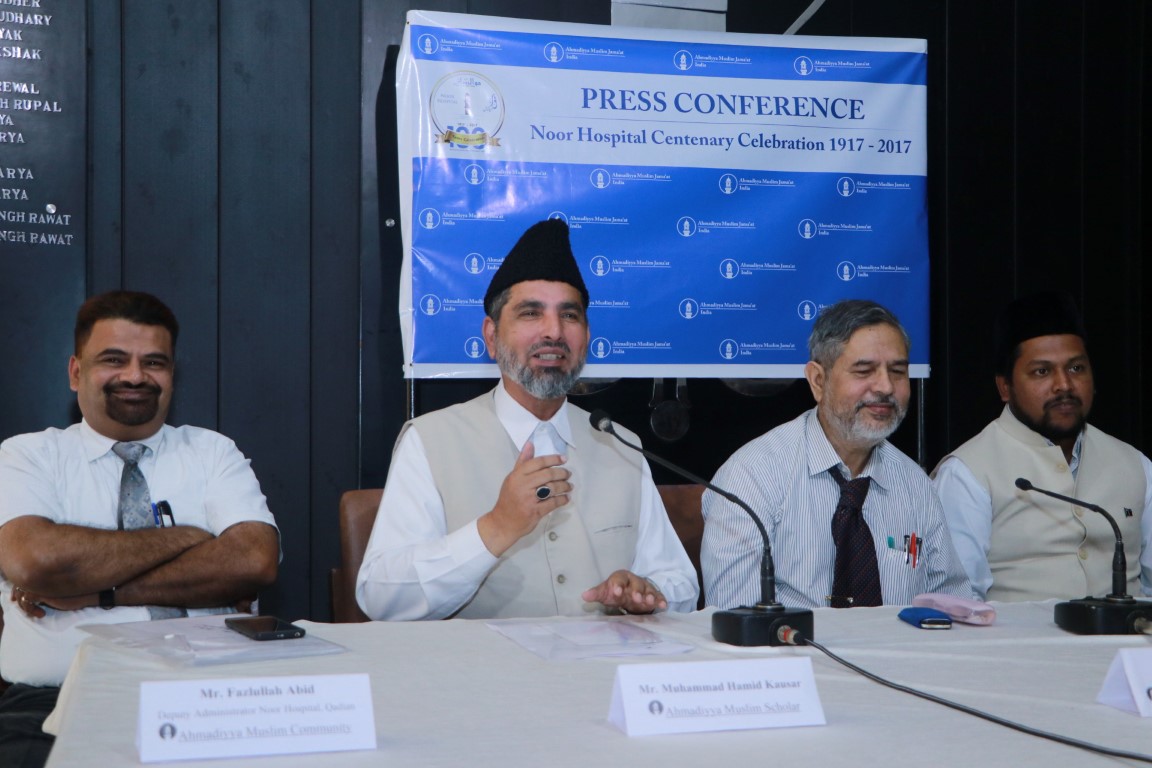 Tariq Ahmad, Spokesperson of Ahmadiyya Muslim Jamaat India, while addressing the media here said, “On 16th October we are going to celebrate hundred years of Noor Hospital Qadian. A documentary based on historic prospective of Noor Hospital and some scholars would be screened, which will put light upon various humanitarian works done through this hospital.”

Muhammad Hamid Kausar, In charge, History Department Ahmadiyya Community, informed, “Along with this we are also going to organize an exhibition in which through display of pictures depicting the journey of Noor Hospital and especially the humanitarian work done to serve mankind will be highlighted.” Thousands of people of the community will join from various parts of India, he added.

Dr. Tareque Ahamed, SMO Noor Hospital Qadian, said, “To mark the occasion, we have also planned to conduct medical camps in various parts of Punjab, mostly remote areas, in which blood donation camps, diabetic checkup camps, health checkup camps etc. would be held.” For blood donation camps, we have target minimum 100 units to donate in a camp, he said, adding that on this occasion dialysis has also been started which is a big gift to all people nearby areas because for dialysis they have to otherwise go to Amritsar or Jalandhar.

Fazlullah Abid, Deputy Administrator Noor Hospital, said, in 1917, The Ahmadiyya Muslim Community India established the hospital in Qadian to meet the needs of its local residents by providing them medical assistance & health care and in the last 100 years, Noor Hospital has evolved to meet the changing needs of the people.

The Hospital traces its history back to the blessed period of Hazrat Mirza Ghulam Ahmad, the founder of the worldwide Ahmadiyya Muslim Community who was born in Qadian in 1835. A time when there was no hospital in Qadian he used to provide free medical assistance with great sympathy and openheartedly to the people of Qadian and outskirts.

Noor Hospital was the first Allopathic Hospital of the Ahmadiyya Muslim Community which was established in Qadian. After this the community has established hospitals in various parts of the world especially in the third world & African Countries to serve the poor & needy.

Noor Hospital also provides Homeopathic way of treatment for free which is very effective & cheap. The Community has also established hundreds of Homoeopathic Dispensaries throughout India in various cities and villages that provide free treatment.

Mujeeb Lone, Ahmadi Scholar, said, “Ahmadi Doctors specialized in various medical fields have dedicated their life to render their service for Noor Hospital. The Hospital is also well equipped to meet every need of the patients. It is our faith that service to humanity is not related to any religion or race, hence improving quality of life of its patients has always been the priority at Noor Hospital.