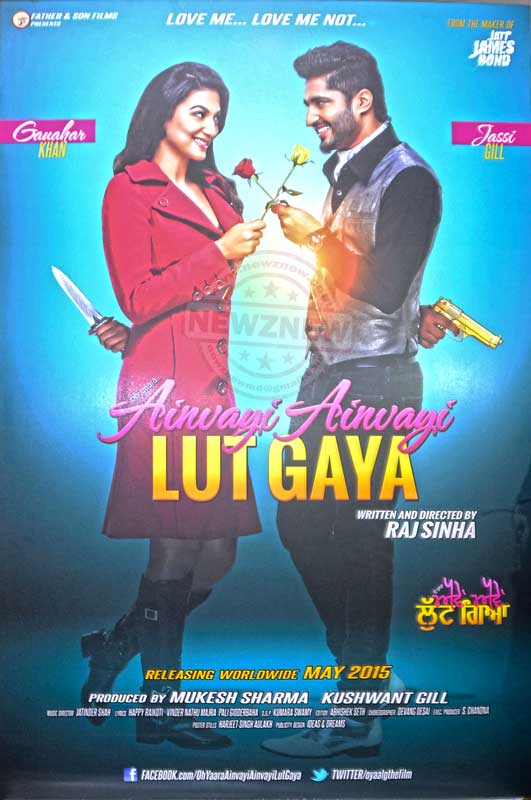 NewZNew (Chandigarh) : Pollywood is bringing to the fore ‘out of the box’ creativity with every new movie. Creating another record for the Punjabi film industry is the Father & Son Films upcoming movie ‘Oh Yaara Ainvayi Ainvayi Lut Gaya’. The poster launch of this movie was graced by the Producers Mukesh Sharma, Khushwant Gill and the star cast consisting of Bigg Boss 7 winner and actress Gauhar Khan and prominent Punjabi singer and actor Jassi Gill.

Producer Mukesh Sharma said that the movie was currently in production stage and they were planning to release it by May. “Ace comedians like BN Sharma, Rana Ranbir and Karamjeet Anmol have added a lot of humor to this movie that will tickle the bones of the audience and offer them something fresh. Gauhar Khan is a great actress and shares a good chemistry with Jassi. I am sure that this pairing will appeal to all.”

Gauhar, who is currently busy shooting for the movie in the city, said that she was just in love with this city and she liked the enthusiasm of the people of Chandigarh. “I am sure that all my fans and people of Chandigarh will like this movie. My maiden Punjabi movie has me excited and anxious at the same time. Jassi is a good actor and I am enjoying myself. I want everyone to support us and watch the movie when it hits the theatres.”

The male lead of the movie Jassi Gill was also present at the poster launch. He said, “It feels good to work with a talented actress like Gauhar and I am sure that the audience will support us. The people of Punjab have showered me with immense love and I am grateful for that.”

The Movie– is the story of a young couple– Ranbir Singh, a quirky theatre actor who’s happy in life in spite of being alone & broke… who then meets “Gunjan Kaur” a girl of today’s generation. In a short span of time, love blooms between them & they head towards marriage.

Everything seems to be perfect in their life, until one day both enter into a tiff and the conflict gets ugly, as Gunjan files a divorce case against him. The movie revolves around the conflict which is treated in a hilarious manner, which eventually leads to the couple realizing the love & fondness for each other.

To sum it up, this film perfectly defines the saying “Everything Is Fair In Love And War”.

‘Oh Yaara Ainvayi Ainvayi Lut Gaya’ will release in May 2015.

All nine members Jaswant Rana of Rawat-Handa panel won the elections Of...