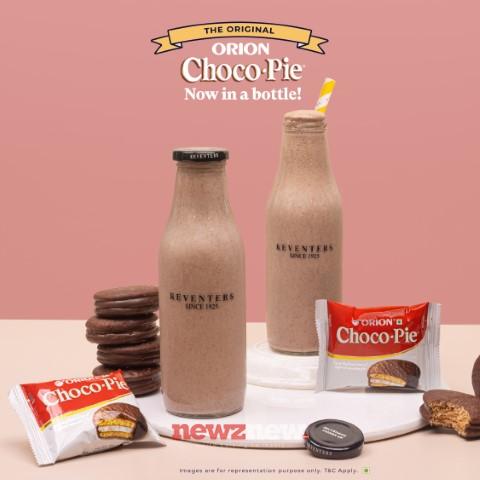 In addition to the heat, the fast-paced populace requires a refreshing ready-to-consume, healthy drink,for the go, andmilkshakes are emerging as quite a popular choice among the same.

Orion, one of the largest food companies in South Korea and makers of the original Choco-Piehas partnered with Keventers to create the Orion Choco-Pie milkshake, an addition to the iconic milkshakes by the latter.

Founded in 1925, Keventers has long been known for its classic milkshakes. Along with Orion, the Orion Choco-Pie milkshake aims to serve all age groups. Available at 200+ Keventers stores across India, this milkshake is available in thedistinctvintage-style, glass bottles across the nation. With the accelerating demand of online food orders, this milkshake is also available on Zomato and Swiggy.

Saurabh Saith, CEO of Orion India said, “As the ‘Hallyu’ or Korean Wave sweeps across the globe, there is an ever-increasing desire for Korean snacks and Orion wants to satiate this demand in India.The Orion Choco-Pie Milkshake is an excellent substitute for the normal chocolate milkshakeand forms a perfect blend of the Choco-Pie and the delicious Keventers milkshake.”

Aman Arora, Co-Founder & Director of Keventers said:Chocolate is unquestionably the most popular milkshake flavour& we believe that the Orion Choco-Pie milkshake shall be a popular choice too – “200+ Keventers locations nationwide offer the Orion Choco Pie milkshake, expanding to new cities & areas. The milkshake’s availability on Zomato and Swiggy was a logical progression given the growth of online food ordering.”